Diplomacy is the art of making relations with other AI players in Beyond Earth. Rising Tide's diplomacy system was completely rebuilt from the ground up from the base game version.

Fear is dependent on the size of a colony's military. Relationships built on fear run the risk of the player being "backstabbed" by groups of colonies.

Respect can be earned or lost with different colonies in different ways including:

The "Wonder War" feature introduced in the November 2015 patch makes the AI far more aggressive when players attempt to complete a Planetary Wonder. Respect and fear levels of AI civilizations will drop toward human players as players get closer to victory.

There are different levels of relationship players can have with the others, each with their own repercussions. To change the status of a relationship, players must reach a certain level of fear or respect with an AI player and will need to spend Diplomatic Capital to purchase it.

Diplomatic Capital is a new resource. It is produced from wonders and buildings, such as the Old Earth Relic and Trade Depot, or it can be given to or taken from other players through negotiations or for renting one of a player's traits.

Diplomatic Capital can be used like energy to purchase units and buildings in a player's cities.

Upon the end of a war, the spoils or losses of the war are based on the player's War Score. War Score determines how successful the player was during the war. It can be influenced depending on what traits each player has.

Players can change or upgrade their traits over the course of the game by spending Diplomatic Capital.

Strategic resources are no longer traded though diplomacy. Instead, they become part of the trade route system. 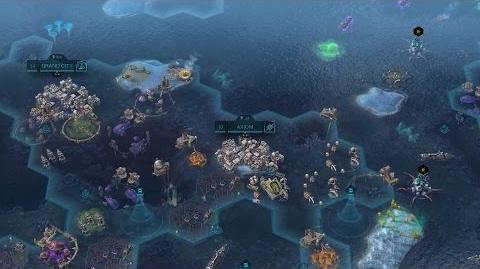