Siege unit of the Medieval Era

Khmer unique Medieval era siege unit. Can move and shoot in the same turn and exerts zone of control.

The Domrey is a unique siege unit of the Khmer civilization in Civilization VI. It replaces the Trebuchet.

The Domrey is the only unique siege unit in the game, and its ability to move and shoot in the same turn without a

Promotion makes it much less clunky than a typical siege unit. It also exerts zone of control, which means that three of them can place a city under siege unless the City Center is next to a water tile, or there is a river involved to complicate the matter. Two to three Domrey, together with some melee or cavalry units to back them up, can quickly punch through medieval city defenses, allowing their user to expand their empire through conquest in the middle stages of the game. Moreover, Domrey are unlocked with Military Engineering, the

Eureka for which is triggered by building an Aqueduct (which the Khmer have excellent incentives to do).

Unfortunately, this unit is not without its downsides. First and foremost, the fact that a unique siege unit belongs to a civilization without any bonuses towards war is perplexing. Despite its strength, the Khmer can't use the Domrey without shifting the focus of their empire from infrastructure to building an army, and the outcome of a war will depend heavily on who their neighbor is and how prepared they are. Additionally, since the Domrey is a siege unit, there are no policy cards to aid in building an army of them any faster, and if you don't capture any cities during a war, you will have wasted a lot of

Production on units that are borderline useless. (Siege units, being slow and suffering penalties when attacking land units, cannot be used for land defense, though Domrey are decent at naval defense.) The Khmer are a civilization that already has trouble with

Production since they require a lot of infrastructure pieces (Holy Sites, Aqueducts, etc.) to utilize their bonuses, so the Domrey is strong yet hard to use in a lot of situations. You should focus

Production to build this unit en masse only if your neighbors are civilizations without significant defensive bonuses or have very small armies. Otherwise, if you just want a regular game aiming for a Cultural Victory with a Religious Victory backup, there isn't much justification for building a lot of Domrey.

The Domrey can be better in combination with the Grand Master's Chapel. The Khmer have strong bonuses to their

Faith output, meaning that they can utilize this building to quickly purchase multiple Domrey and a supporting army with

Faith. Pair this with Theocracy to make said purchases cheaper, as well as gaining extra

Faith from cities with Governors to spend on more units. Again, whether or not you should use this unit depends heavily on the game's landscape, and random factors (such as how favorable your starting location is, who your neighbors are, how much territory you already own and whether you need any more) should be considered before you pour resources into this unit. If you have no intention of going to war, it should act only as a source of 4 Era Score.

If there aren't enough horses for your cavalry, why not use the mighty elephant to crush and terrify your enemies?

The Khmer joined a long tradition of employing war elephants in their military campaigns. Research suggests that the Indians first used elephants in their military campaigns around 1,100 BCE, tuning what was at that point a farming helper animal and turning its 12,000 pounds of might into sound and terror for their opponents on the battlefield (at least until the invention of gunpowder evened the odds).

The mount of kings, military leaders would ride elephants into the battlefield, using their lines to stampede through enemy forces.

Khmer riders would use the precision of double crossbows to supplement the raw power of their elephants. However, this domrey variant adds a bit more sheer force with a mounted ballista to impale the bold soldier not wise enough to run away. 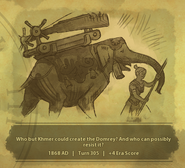 Historic Moment for building the Domrey
Community content is available under CC-BY-SA unless otherwise noted.
Advertisement