Wikipedia has a page called:
Dromon

The Dromon is a unique naval ranged unit of the Byzantine civilization in Civilization VI. It replaces the Quadrireme.

The Dromon brings its famed Greek fire back to Civilization VI in style. It is undoubtedly a powerful unit, but it is also the least utilized piece in the Byzantine arsenal (which really says something about Byzantium's power level), since all in all, Byzantium is still a land domination civilization, with no bonus or infrastructure supporting a naval gameplay.

Ranged Strength when attacking both land and naval units, making it ideal on offensive missions against coastal empires. The Dromon also deters even the strongest naval powerhouses like Norway or Phoenicia from launching naval attacks. However, the most important bonus of this unit that sets it apart from the standard Quadrireme is its

Range of 2. The Quadrireme, overall, is an underused unit that is almost never seen in combat due to its extremely limited reach (which, like all other units with a

Range of 1, means it cannot focus fire on one enemy well and exposes itself to the front line while doing so). The Dromon removes this limitation completely. Byzantium, by virtue of this unit, has a very early version of the Frigate, which they can wreak havoc with if they choose so. The Dromon, therefore, can engage actively in combat to gain the Bombardment and Rolling Barrage

Promotions when no one else can with their Quadriremes. This will give Byzantium a huge naval power spike in the late Renaissance when the Frigate is unlocked: their Frigates will start with a few sieging

Promotions that will take much longer for other players. Again, unless you choose to hamper your own power level by playing on a water-dominated map, even a most powerful naval unit like the Dromon can be overlooked, since it does not synergize too well with the civilization it comes with.

Combat Strength on defense, same as a Galley). However, you still have to watch out for unique Galleys, the Viking Longship and the Bireme. Although these two units are not that much stronger (35

Combat Strength), they come at half the price of the Dromon (especially when you consider Phoenicia can crank out naval units really fast with their Cothon). One Dromon definitely cannot stand against 2 or 3 Viking Longships or Biremes at the same time.

The Byzantine navy had some of the most advanced ships in the Mediterranean. Abandoning an earlier reliance upon a trireme with a ram in its prow, the dromon had a “beak” (calcar), a projection at the ship’s front that served as a bridge for soldiers to cross onto enemy ships (or, alternately, to crush the enemy’s oars). Along with the triangular sail and one or multiple banks of oars, the dromon was fast and maneuverable, and deadly.

But the dromon’s most fearsome feature was its fire. “Greek fire,” a mixture of oil and quicklime, was a concoction that burned even when floating on water. Some dromons had Greek fire projectors at their bow: essentially a medieval ship-mounted flamethrower. This weapon was used to great effect to repel Arab sieges of Constantinople as well as, famously, an invasion of Rus (Viking raiders from what is now Russia) during the reign of Emperor Romanus. In one contemporaneous account, the Rus, when they saw the flame cannons, “threw themselves from their ships into the sea, choosing to be drowned by the waves rather than cremated by the fire… No one escaped that day unless he was able to flee to the shore.” 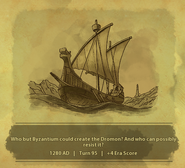