Support unit of the Atomic Era


The Drone is an Atomic Era support unit in Civilization VI: Rise and Fall. It upgrades from the Observation Balloon.

The Drone provides unparalleled support for siege units, increasing both the range and power of their attacks. It also has a sight radius of 5, which is exactly how far Rocket Artillery with the Forward Observers

Promotion can fire with a Drone spotting for them. This incredible range will make it easy for them to attack enemy cities (and the units defending them) from behind mountain ranges, bodies of water, or protective lines of friendly units.

As the 20th Century gave way to the 21st, so changed the face of modern warfare and espionage. Drones (also called “unmanned aerial vehicles” or “UAVs”) allow an army to observe and attack an enemy without putting their own soldiers in danger. Although no person physically flies drones, they do require pilots—whether by preprogrammed flight patterns, or human pilots relaying commands via satellite. They can serve as “eyes in the sky” for dangerous areas, whether the battlefield or natural disaster zones, and can even perform the most banal of tasks—pizza and package delivery.

Surprisingly, these weapons are not a new invention—although the practical use and combat efficiency of earlier attempts was questionable, at best. (The “bomb-carrying bats” plan, proposed by an American dentist during World War II, never quite panned out as an effective weapon for the Allies.) 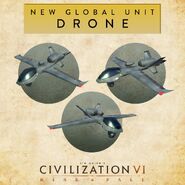