Aztec unique Ancient era unit that replaces the Warrior. Has a chance to capture other civilizations' military units by turning them into Builders.

The Eagle Warrior is a unique melee unit of the Aztec civilization in Civilization VI. It replaces the Warrior.

The Eagle Warrior is one of the most terrifying units in the early game! Its high strength, combined with the fact it's available from the very start of the game, allows the Aztecs to mount incredibly effective early rushes, comparable only to those of the Sumerians. What's more, its unique ability can singlehandedly turn the Aztecs into the fastest developing civilization in the early game! With Builders aplenty, they can quickly upgrade the tiles around their cities; what's more, thanks to the Aztecs' civilization ability, they can use Builders to speed up

The only catch is that the Eagle Warrior's ability works only against units of civilizations and city-states (as well as Free Cities in the expansions), not against Barbarians. This practically forces the Aztec player to make war early on if they want to take advantage of these units, but you might want to leave one or two cities alive to succumb to Loyalty pressure to get more use out of your Eagle Warriors even in peacetime. Go get that pesky neighbor!

One of the two elite class of infantry (the other being the Jaguar Warriors) in the Aztec army, the Eagle Warriors were the bravest young men of noble birth and/or those who had taken the most prisoners in battle. Like the Jaguars, the Eagles used the atlatl, bow, spear and macuahuitl (wooden swords set with obsidian shards); unlike the Jaguars, the Eagles decorated their armor with eagle feathers and wore a headdress shaped like the head of an eagle with the beak wide open. And they had a hilltop temple in Malinalco. Upon taking 20 prisoners – intact enough to serve as human sacrifice – a young warrior was eligible to become an Eagle Warrior, no doubt making his family very proud. Until the Spanish arrived with their cannons, muskets, and horses, the Eagle and Jaguar warriors were the toughest bullies on the Mesoamerican block. 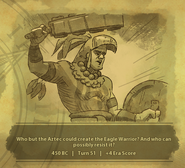