Edit
watch 02:59
Wiki Targeted (Games)
Do you like this video?
Play Sound

The Ecology Damage is listed on the display screen for each base. The manual states it is the percentage of chances you have for Planet to respond and attack you.

It is determined by the number of terraforming enhancements you have built in range of that base, and the number of minerals the base is receiving by any means. Committing atrocities such as the use of nerve gas will cause the planet to attack you, unless the Planetary Council has voted to eliminate the ban on them. The same is true with using planet busters but the damage is more severe.

If enough boreholes are built, the planet will heat up and melt the ice caps flooding everyone. Voting to launch solar shades helps with this, and you can use formers to raise your land.

Ecological damage can be altered by making choices in the Social Engineering menu that affect Planet.

You can also build Base Facilities and Secret Project to help, or plant trees to reduce it.

After you pass its current tolerance threshold, it causes xenofungus to bloom around your base, destroying some terrain enhancements. It also releases native lifeforms to attack you.

Every time a massive attack is created by the planet, its tolerance threshold goes up, so the same amount of eco-damage doesn't bother it any later on.

The planet will sometimes cause a volcano to erupt in the ocean, creating a new island. 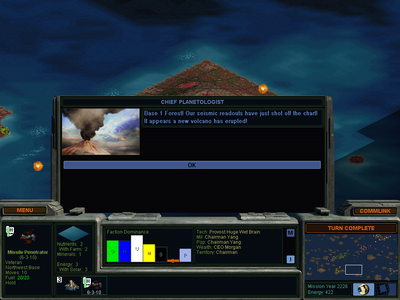