The Ectogenesis Pod will permanently tie up 2 Geothermal resources.

“I bring forth myself; I shall be the ever-born and the never-dead.” - The Exodus Sutra II:3

For centuries, the defining limit on population growth was that organic hosts were needed to incubate developing offspring. The Ectogenesis Pod removed that limit, allowing the creation of organisms without requiring developmental hosts.

The technology was long in development. Pre-Mistake civilizations of Earth were familiar with technologies for creating embryos (references exist as early as the 20th Century), but could not bring those embryos to term without biological hosts. Much empirical and theoretical work in the area of geno-bio-ontologistics was required before the first ectogenetic banks could be brought online.

The Ectogenesis Pods are truly a wonder of their era, combining sophisticated genetic storehouses and recombinators with the first true Lotaxl tanks, all housed in a structure designed to insulate the developing creatures within from errant radiation, planetary contaminants, and marauding armies. From within the Ectogenesis Pods came forth new herds of animals for planetary Colonists, cures for microorganism-based diseases, and not infrequently, workers for the planetary colonies themselves. 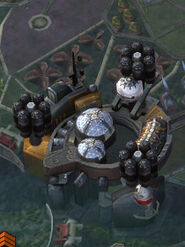 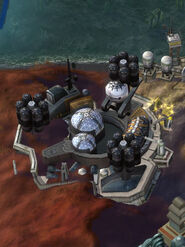