Wikipedia has a page called:
Egypt

* Melodies are from "Music of the Ancient Sumerians, Egyptians & Greeks" by the Ensemble De Organographia.

The Egyptians have two exceptionally powerful unique components: their Burial Tomb and War Chariot are flexible for both an expansive Liberty empire, or a defensive Tradition civilization. Replacing the Temple, the Burial Tomb has per-city

Happiness and no maintenance cost - perfect for a wide empire. Regarding the War Chariot, removing the Chariot Archer's

Conversely, the Egyptians' unique ability is one of the best for those who wish to build lots of wonders in a tall Tradition empire. This bonus is versatile and can be helpful for any victory type because there are powerful wonders for every strategy. Aristocracy can further cement this advantage in wonder production, which provides a significant advantage over your competition. Having a source of

Marble in one of your cities can boost wonder production even more (if only for the first two eras in Brave New World). When focusing on a few large cities with high

Production for wonders, the other abilities provide a supporting role: the Burial Tomb helps keep the civilization very happy - an additional benefit that can help you start

Few civilizations have left such an indelible mark on history as that of Egypt. Living astride the mighty Nile River for some 5,000 years, Egypt is one of the oldest surviving civilizations on the planet. Among many other firsts, Egypt is credited with the invention of writing around 3000 BC. Using sophisticated mathematics, Egyptian scholars plotted the movement of the planets with great precision. And of course, the Egyptians were the ancient world's greatest architects, creating monuments and temples that still awe and inspire us today.

Egypt is a riparian (river-based) civilization lying alongside the Nile, which, at some 4000 miles in length, is the longest river on the planet. Egypt occupies the northern section of this river in a narrow but extremely fertile corridor running through otherwise harsh desert terrain of the North African Sahara desert. While the physical area of Egypt extended a great distance to the east and west, the vast majority of that terrain is empty useless desert, and through its history almost all Egyptians have lived within walking distance of the river.

Until the implementation of damming projects in the 20th century, the Nile flooded its banks in the summer of every year. Egyptian farmers relied on these floods to bring water and fresh nutrients to their fields, and a dry year could easily spell famine and disaster to the population. The Nile also provided a good deal of protein to the Egyptians, who were adept fishermen and who early on mastered the construction and handling of small watercraft.

The Mediterranean Sea lies to the north of Egypt. A mild and generous sea, the Mediterranean encourages exploration and trade between all civilizations who live on its borders.

The first settlers of the Nile valley are thought to have arrived around 7000 BC, driven to the river as climate change turned the surrounding once-fertile lands to desert. By 5000 BC crops were being raised in local settlements along the river, and, as agriculture improved, the settlements grew in size and power. Luxury items such as mortuary pottery, copper ornaments, beads, and cosmetics begin to be seen in burial sites from that period, suggesting a significant growth in wealth and leisure in the culture.

Increased wealth also allowed for the creation and maintenance of military forces which could be used to conquer other nearby cultures. By approximately 3000 BC much of Egypt was unified. The first king mentioned in the historical records is Menes, who founded the capital Memphis, is credited with many irrigation works. His "First Dynasty" would last for some two centuries.

The First and Second Dynasties are known collectively as the "Early Dynastic Period" and last from approximately 3100 BC to 2600 BC. During this period Egypt extended its control south along the Nile and east and west along the coast of the Mediterranean.

This period spans the years from approximately 2600 BC to 2100 BC. The Old Kingdom period is best known for the large number of pyramids constructed as tombs for pharaohs. Egyptian vessels traveled the Mediterranean and Red Seas, trading for items such as food, spices and Lebanese cedar, as well as luxuries like myrrh (a type of incense), ebony, and gold. The Old Kingdom ended when a severe drought caused the collapse of the central government, already weakened by corruption and civil war.

In 525 BC Egypt was captured by Persia, who would control the country until it was taken by Alexander the Great in 332 BC as he systematically dismantled the Persian Empire. After Alexander's death the Greeks established the Ptolemaic Dynasty.

The able Ptolemies ruled in an unbroken line until the death of Cleopatra VII in 30 BC. Her suicide marked the end of Pharaonic rule and the beginning of Egypt's centuries as a Roman and Byzantine province. Although swept by the Islamic tide in 642 AD, Egypt was to remain under foreign occupation - Arabic, Ottoman, French, and British - until after World War I, when she finally gained her independence from a British administration weary of overseas conflict. From 1922 through 1952, Egypt appeared to be one of the world's most successful constitutional monarchies. But it was ripe for revolution; the military coup of July 1952 led by Gamal Nasser, ironically, finally made Egypt an island of stability in a turbulent Middle East.

Egypt's mastery of monumental architecture is virtually unmatched in history. The Egyptians were also great sculptors, creating many quite beautiful statues of their pharaohs and gods. They also made beautiful and delicate works of gold, jewels and other precious metals, many of which have been discovered in tombs and vaults. Actually, much of Egyptian culture and arts seems to have been dedicated to death, entombment and the afterlife (or perhaps art on those subjects was most likely to have been entombed and thus has survived better than non-death-related artwork).

Religion was extremely important to Egyptian society. The religion has an incredibly rich pantheon of gods, and a detailed and complex creation mythos. The pharaoh was both a man and a god, and he was responsible for interceding with the gods on his subjects' behalf. The priests also served as the society's civil servants. (If the Egyptians ever heard of the concept of separation of church and state, they wanted nothing to do with it.) The Egyptians believed in an afterlife for those judged worthy, and they believed in sorcery and magic. Many historians believe that the Egyptians saw the pyramids as pathways to the realm of the gods for those buried inside.

Clearly, it is impossible to do justice to a 5000-year-old civilization in the space of these short paragraphs. At her height Egypt was a mighty, continent-spanning empire, whose scientific and cultural advancements brought incalculable benefits to humanity. And its greatest works, the pyramids, can still astonish the modern viewer, much as they did to those who saw them 4,000 years ago.

The Egyptians were the first people to make wine.

According to some ancient myths, bees were created from the tears of the sun god Ra.

The first known documented peace treaty occurred between Ramesses the Second of Egypt and Hattusili III of the Hittite empire.

Contrary to popular myth, it is not known how the Sphinx lost its nose. There are sketches of the Sphinx without a nose in 1737, over 60 years before Napoleon reached Egypt. The only known person to have damaged it was an Islamic cleric, Sa'im al-dahr, who was lynched in 1378 for his vandalism.

Also contrary to popular belief, excavated skeletons show that at least some pyramid builders were actually Egyptians, not foreign slaves, some of whom were permanent employees of the pharaoh, and others peasant farmers employed after the growing season. 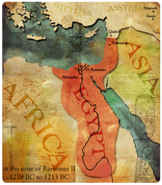