Great Artist of the Industrial Era

• Adoration of the Magi

• The Assumption of the Virgin

Adoration of the Magi (

The Assumption of the Virgin (

El Greco once wrote, “I paint because the spirits whisper madly inside my head.”

Born Domenikos Theotokopoulos around 1541 in Crete, in his mid-20s he travelled to Venice to study under Titian. Under his guidance, Domenikos began mastering the fundamentals of Renaissance painting: perspective, colors, the human form, and crafting detailed scenes. From Venice to Rome, where he resided and worked in the palace of Cardinal Alessandro Farnese, an influential and adept diplomat for the Holy See. In 1572, El Greco (it is around this time that he changed his name to something more manageable by Italians) established his own studio; but success proved elusive and he departed for Spain in 1576.

In Madrid, El Greco failed to secure the royal patronage of Philip II, and so moved on to Toledo. There he was hired by Diego de Castilla, dean of the Toledo Cathedral, to create a group of works for the church. During his next three decades, El Greco refined his style, his paintings marked by exaggerated and distorted depictions of human beings, producing landmark works such as 'St. Peter in Tears' (1582), 'The Burial of Count Orgaz' (1588), 'The Adoration of the Shepherds' (1599), and 'The Opening of the Fifth Seal' (1614).

His style and emotional subjects vividly expressed the passion of the Counter-Reformation in Spain. His work underscored with powerful images the importance of the sacraments, the Virgin, and the saints. His later paintings with their haunting intensity would influence scores of artists for centuries, from the Cubists to the German expressionists to the abstract impressionists. He died in Toledo in 1614. Following his death, he fell into obscurity until rediscovery in the late 19th Century, when he was declared the “Prophet of Modern Art.” 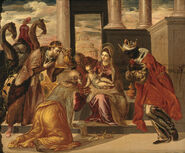 Adoration of the Magi

The Assumption of the Virgin 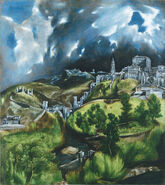