Building of the Industrial Era

Production to all city centers within 6 tiles
After researching the Electricity technology, this building provides an additional +4

Wikipedia has a page called:
Electronics industry in Japan

The Electronics Factory is a unique building of the Japanese civilization in Civilization VI. It is built in the Industrial Zone district and replaces the Factory.

The Electronics Factory is not much of an improvement over the standard Factory. Unlike, for example, the Tlachtli (also a pretty underwhelming unique building), the Electronics Factory actually comes into play often - not because it is so powerful and unique, but because the standard Factory and the Industrial Zone are so important that they are impossible to ignore. What sets it apart from its standard counterpart, however, is negligible. In vanilla and Rise and Fall, it receives only 1 more

Production. In Gathering Storm, its base effect is even worse, as it is exactly the same as the Factory, only it gains an extra 5

Powered compared to the 3

Production of the Factory. This is the only case in the entire game where the bonuses of a piece of unique infrastructure are all conditional, meaning you do not receive any "uniqueness" right off the bat. (Incidentally, in Gathering Storm, England's standard Factory is superior in

Production to this unique building, as it provides 3

Of course, when you unlock Electricity, each copy of this building provides +4

Culture (another conditional bonus), but 4

Culture per city is a small bonus at the end of the Modern Era. Considering that Japan has no direct bonuses towards generating

Science but some bonuses towards

Culture (they can build Theater Squares in half the time), and this bonus is bound to a technology rather than a civic, you will not have an easier time unlocking this to gain an edge over other empires. Not to mention, the bonus is extra

Culture), at a point too late (late Modern Era) and in an amount too small (4 per city) to be largely impactful. And since this

Culture yield is bound to a unique building, it does not get translated into

Tourism after you research Flight. Also, because the Electronics Factory's

Production bonus doesn't stack with that of other Electronics Factories within 6 tiles, constructing this building in every city for its

Culture bonus alone is an inefficient use of time and resources. The only case in which this practice is justifiable is when a city has Magnus and his Vertical Integration title, or is within a 6-tile radius of such a city.

All in all, you shouldn't put too much emphasis on this building. You will still have to use it, since the Industrial Zone is an important district and the Factory is crucial when the Industrial Era comes, but you do not exactly have an edge over anybody else with their regular copies of the Factory. The extra

Culture should be considered a free bonus and not something you work towards.

With the advent of consumer electronics, the market for all manner of gizmos and gadgets for entertainment, communication and wasting time exploded in the late 20th Century. The Consumer Electronics Association estimated that sales of electronics for personal use – from computers to MP3 players, calculators to digital cameras, and so forth – exceeded 150 billion dollars in 2007 AD. To feed this postmodern addiction, semi-skilled laborers working in sprawling electronics factories assemble standardized parts into an ever-increasing flood of new products. Leading the way in this tidal wave is Japan, with the largest electronics industry in the world, although both South Korea and China are increasingly competitive. The first “modern” electronics factory was built by Sony, founded in 1946 AD. In the 1950s, Japanese engineers pioneered commercial applications for the transistor and in the 1970s and 1980s for the semi-conductor. Japanese innovations in miniaturization and in standardizing electronics manufacturing have kept their factories the most profitable in the most competitive field in consumerism ever seen.

Highlighted and close up view of the Electronics Factory 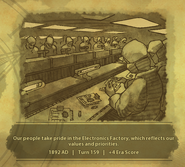