Enrico Dandolo (c. 1107 – May 1205) was the 41st Doge of Venice from 1192 until his death. Known for his blindness, piety, longevity, and shrewdness, he is often considered the most influential, yet controversial Doge in the history of Venice. He leads the Venetians in Civilization V: Brave New World.

Enrico Dandolo speaks with a "modern" Venetian dialect, albeit mixed with some modern Italian words here and there. On his diplomacy screen, he is standing on a bridge in the center of Venice at night, dressed in his ducal robes and hat. Dandolo's eyes remain in a relatively fixed position in his head (unlike most leaders, who "look around the room") on account of his blindness.

Enrico Dandolo will most likely attempt a diplomatic victory.

Dandolo is not very bold. He is very willing to declare friendship, but he is often disloyal.

Because of his unique ability, Dandolo will almost never expand his empire. He tends to acquire the geographically closest city-states that will form a contiguous landmass, and ignore the rest. He will not build an army to attack with, but he will have a large navy and well-defended cities.

Gold through trade and economic development. He is also very keen on Great People, religion, and espionage.

Dandolo will hardly ever declare war. He is very friendly to other civilizations and city-states alike. On the other hand, he is very likely to backstab.

Enrico Dandolo, the 41st Doge of Venice, was famous for his piety and longevity, while equally infamous for his pivotal role in the Fourth Crusade which led to the sack of Constantinople and the collapse of the Byzantine Empire. What made this all the more remarkable was the fact that Enrico was blind. Born to a powerful family, Enrico Dandolo served the Republic as a diplomat for much of his life. Elected Doge in June 1192 AD at an advanced age, he nevertheless took up the post with vigor. In the following years he reformed the Venetian currency, as well as its legal system, and sought stronger ties with the Western powers. In 1202, the knights of the Fourth Crusade were stranded in Italy without funds to pay for ships. Dandolo "took the Cross" and made Venice the major financial backer for the crusade. This ultimately led to the attack on Constantinople in 1204, where the Doge was present and took an active part. He died shortly thereafter, and was buried in the Hagia Sophia.

Born into one of the most powerful and influential families in Venice, young Enrico was groomed for a life of service to the Republic. His father Vitale was a famed jurist and member of the ducal court, a close advisor to the Doge Michiel. After a series of administrative posts, in 1171 AD at the age of 64 Enrico Dandolo entered the Venetian diplomatic service. In March of that year, the Byzantine emperor Comnenus had seized the property of thousands of Venetians living in his realm. Dandolo accompanied Doge Michiel on a disastrous military mission to Constantinople; upon returning to Venice, an irate mob killed Michiel, but Enrico escaped blame and was subsequently appointed ambassador to seek a diplomatic settlement with Byzantium. On his second mission, legend has it that so vigorous was Dandolo's protection of Venetian interests that the Byzantine emperor had him blinded. However, historical records show that Enrico Dandolo lost his sight gradually between 1174 and 1178, likely as the result of a severe blow to the head.

Returning without a treaty - one would not be signed between Venice and Byzantium until 1186 - Dandolo was dispatched as ambassador to the Kingdom of Sicily in 1171 AD and to Ferrara in 1191. His diplomatic abilities were rewarded with close cooperation with both to challenge and limit Byzantine influence in the western Mediterranean. In recognition of his services, in 1178 Dandolo was made one of the forty individuals commissioned to elect doges. When Doge Orio Mastropiero retired to a monastery, Enrico Dandolo was himself elected Doge of Venice in June 1192.

Although elderly and blind, Enrico Dandolo proved a vigorous and able leader for Venice. In one of his first official actions, he reaffirmed the "ducal promise," codifying the duties and rights of the dogeship. In the next few months, drawing on his education in the law, he revised the Venetian penal code and published the first collection of civil statutes for the Republic. In 1194 AD he turned his attention to currency reform, making the silver Venetian grosso the primary coinage for trade throughout the Mediterranean.

Dandolo was just as vigorous in his diplomatic dealings. Drawing on his previous experiences, he put an end to commercial disputes with Verona, concluding treaties with that city-state and with Treviso in 1192 AD. The Doge followed these triumphs with treaties with the Patriarch of Aquileia (1200), the King of Armenia (1201), the Holy Roman Emperor (1201) and rival Byzantium itself (1199). He also led Venice in successful military conflicts with Zara when that city tried to unite with Hungary, and with Pisa when that economic challenger attempted to establish outposts in Istria, which Dandolo claimed to be in Venice's zone of influence.

Pope Innocent III came to the papacy in 1198 AD, preaching a new crusade to liberate the Holy Land. Largely ignored by European royalty, the call was taken up by Count Thibaut of Champagne and Count Boniface of Montferrat. Being short of funds, in 1201 the crusaders sent envoys to the maritime city-states to acquire transport to Egypt, where the crusaders planned to strike at the heart of the Ayyubid lands and from there free Palestine. Doge Dandolo agreed to supply transport for 33,000 troops - an ambitious number - in exchange for a hefty payment; the Pope ratified the contract. To fulfill their end, the Venetians built 50 warships and 450 transports. When, however, the crusaders proved unable to pay the agreed sum, rather than lose the investment, Dandolo waived the fee and joined the Fourth Crusade as one of its leaders. As compensation, the Doge demanded that the crusading force help Venice retake the town of Zara, then in revolt.

After the fall of Zara, Dandolo supported the diversion of the crusade from Egypt to Constantinople. There the Catholic leaders sought to place Alexis Angelus on the Byzantine throne, thereby gaining Byzantine support for their invasion of the Holy Land. This eventually led to the brief siege, capture and sack of Constantinople. In spite of his age, Dandolo took an active role in the planning and the operation, leading his Venetians against the sea walls of the great city, which fell to the crusaders in April 1204. Subsequently, Dandolo played the most central part in formulating the treaty partitioning the empire between the Byzantines and the crusaders (who sought to form a Catholic "Latin" empire), with Venice having significant rights in each.

Doge Dandolo joined the disastrous crusaders' invasion of pagan Bulgaria, but returned to the city and died of health complications in May 1205. He was buried in the Hagia Sophia, although the exact location of his tomb in the great church is unknown.

Enrico Dandolo is today considered one of the greatest Venetian Doges. He took control of a mercantile power in decline, riven by corruption and inefficiency, challenged by great and small powers across the region. Trade had declined, and its military was moribund. By his death, he had ended all outside threats to Venice's influence, and made it the dominant power in Mediterranean trade again. Historians have referred to Dandolo as the "founder of the Venetian colonial empire." Venice itself would be prosperous, stable and secure for the next century.

After the fall of Constantinople in 1204, the barons offered Enrico Dandolo the imperial crown of the Byzantine Empire, but he refused so as not to violate the constitution of Venice.

Greetings, most astute Doge Enrico Dandolo of Venice, master of statecraft and shrewd negotiator. Although you rose to power late in life, old age did little to slow your cunning or ambition, as you deftly managed the bustling commercial center of Venice during a time of great instability. In aligning yourself with the Fourth Crusade, you carefully gained a strategic advantage and used the Crusaders to reacquire lost territory for Venice. Your role in guiding the Crusaders during the sacking of Constantinople led to an even greater expansion of your power, and secured your legacy throughout history.

Most insightful and cunning Doge, Venice once again requires the service of a skilled leader, one who can bring the republic back to the forefront of world affairs. Can you establish your nation through careful trade, or will you work to conquer your enemies through diplomacy? Can you build a civilization that will stand the test of time? 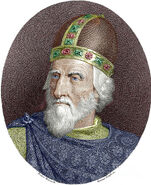