"Used to bring Earthling Settlers through a warp gate from Earth. Leads to the Promised land Victory."

To build this Wonder, select Exodus Gate from the city Wonders build list. One will then be presented with the locations where the wonder may be built. Select a suitable hex and answer the confirmation prompt.

Earthling Settlers use the same placement rules as settlements. Up to 6 settlers can be settled in a single settlement, meaning that 4 settlements are necessary to win the Promised Land victory.

An imperfect analogy: An ocean liner breaks down in the middle of the ocean. Satnav no longer works, and the crew no longer knows how to use a sextant. There are enough powered boats to send a small portion of the crew and passengers over the horizon to look for help. The boats are prepared and filled, and then sent away. What is life like for those on the broken-down liner? They have invested the best of their resources in the departed, yet there is scant hope that these few small boats can cross the ocean, find help, and return. And yet this imperfect analogy gives us a taste of what life was like for those remaining behind on Earth after the Inflection Point. Scarcity, want, strife, and perpetual waiting were the lot of those left behind.

It is little wonder that the Earthlings should quickly grow despondent. The odds of the Seeding being successful were always slim. Why should the colonists honor their mandate to rescue the Earth? Would it not be easier, more attractive, and simpler to start over from a world of plenty? Surely this was the case in some colonies, but there were just enough who remembered and honored the old promise of the Seeding, and when the time came, they were prepared to rescue the despondent, starving people of Earth.

The Exodus Gate is a marvel of applied spatial physics, first theorized on Earth, but brought to fruition by colonial scientists. Once the geography of vast distances became less tyrannical, and ways were found to keep the wormhole stable from a single end, then the work began of bringing humanity onto the new world, and stabilizing conditions on the old one. In many ways, while the Exodus Gate is a marvel of engineering, it was also a marvel of social logistics. Entire nations had to be brought forward onto the new world and settled, quickly, in refugee camps, to make room for the throngs passing through. And the people of Earth streamed through the gate, even as the other colonial powers did everything in their effort to stem the human tide.

But this was not possible, for the Gate-Openers knew and understood the fundamental power that is in all people. They were wise, and they had prepared for this day over many lifetimes. They felt it their duty and privilege and great mandate to bring the Old Earth to the New Eden. That guns were pointed against them, and that food was scarce, that was not to be accounted for. The opening of the Exodus Gate was the last pained pang of Humanity in transition to a glorious new beginning, led by those who had remembered the debt to those left behind. 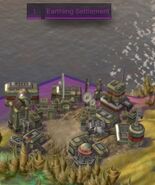