"An enormous and lofty column of flame allowed the people in Holt to read as perfectly at night as if it had been day."
– Liverpool Mercury

Wikipedia has a page called:
Eyjafjallajökull

Eyjafjallajökull is a 2-tile impassable Natural Wonder available in Civilization VI with the Vikings Scenario Pack. Eyjafjallajökull may be found on Tundra or Snow. Its tiles provide +1

Food, and +2 Appeal to adjacent tiles.

In Civilization VI: Rise and Fall, discovering Eyjafjallajökull grants +1 Era Score, or +3 Score if the player is the first to do so.

In Civilization VI: Gathering Storm, Eyjafjallajökull is considered a Volcano. On eruption, it gives medium yields and most likely damages buildings and districts. Eyjafjallajökull's eruptions are infrequent, but it is always active. Its tiles provide +1

Food, and +2 Appeal to adjacent tiles.

Food in Gathering Storm) to adjacent non-wonder tiles (see diagram). However, as with all impassable wonders, the individual wonder tiles of Eyjafjallajökull offer no benefits, and cannot be developed or improved. Eyjafjallajökull is usually most effective very close to a city, since its Tundra spawn means that a city founded near it will have some trouble supporting itself unless it works the tiles holding the Food adjacency bonus, and even then it's advisable to have some

Deer Camps in the city to be safe.

In Gathering Storm, however, settling on this wonder is almost always much more worth it thanks to its newfound property of being a special type of Volcano. Its eruptions are very likely to add significant extra

Science yields to adjacent tiles, enough so that working the volcanic soil with improvements is well worth the potential loss of

Population. It will especially be a boon to Russia and Canada, civilizations whose abilities support founding a Tundra city.

Eyjafjallajökull is the name for both an Icelandic volcano and the ice cap plugging its caldera. Though the volcano has remained active for over a millennia, it was little known outside of Iceland until a minor eruption in 2010. Its subsequent ash cloud halted air traffic in Europe for nearly a week and spawned thousands of hours of breathless news reports. Eyjafjallajökull's eruptions have traditionally predicted even larger eruptions of the nearby Katla, a far more active subglacial volcano—much to the chagrin of European air traffic controllers. 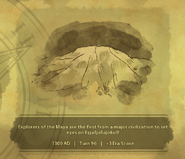