The Feitoria allows the Portuguese to use luxury resources of city-states without even having them as allies, which provides a great advantage. Research Navigation, then send out Workers to all city-states whose resources interest you!

The Feitoria presents the most original idea for an improvement in Civilization V and its expansions; however, its implementation is so dreadfully obtuse that it renders the entire improvement close to being worthless. This improvement is only useful when built in the territory of a city-state with which you are not allied - if you are its ally, you'll get the luxury anyway, and you can't trade it away in either case. The problem is that the Feitoria has to be built by a Worker, making it more convenient to construct in the territory of a nearby city-state, but you are overwhelmingly more likely to be allied with city-states right next to you than ones across the map. Since Portugal can buy

Trade routes, and it's generally easier to complete quests of city-states next to you, the Feitoria seems counter-synergistic with Portugal's ability. In order for this improvement to be useful, your Worker has to embark and cross the oceans at a painfully slow speed, without any guarantee it will arrive safe and sound unless you send a military unit along to protect it.

Once you construct the Feitoria, you will have access to the city-state's luxury resource(s) for as long as it exists. The Feitoria will also help you defend that city-state in case someone attempts to annex it; moreover, you may not have a chance to stay away from such conflict, given that pillaging the Feitoria means that the attacker also declares war on you!

The Feitoria - Portuguese for "factory" - were trading posts established in foreign territories during the Middle Ages. A feitoria served simultaneously as marketplace, warehouse, settlement, and staging point for exploration. Often established with a grant from the Portuguese crown, these private enterprises repaid their debt through the buying and selling of goods on behalf of the crown and through collecting taxes on trade that passed through their gates. During the 15th and 16th centuries, a chain of over 50 feitoria were built along the coasts of west and east Africa, India, Malaya, China and Japan. The feitoria allowed Portugal to dominate the Atlantic and Indian Ocean trade routes for three centuries. 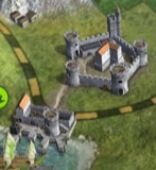 Feitoria in game
Community content is available under CC-BY-SA unless otherwise noted.
Advertisement