Trade Routes sent to this city from Portugal receive +4

The Feitoria is a unique tile improvement of the Portuguese civilization in Civilization VI. It is built by the Nau and must be on a Coast or Lake tile adjacent to land and a bonus or luxury resource in the territory of another civilization or city-state with whom you have Open Borders.

The Feitoria makes a great comeback in Civilization VI, and while it retains its unique concept from the Civilization V counterpart, the Feitoria is a useful, integral part in the Portuguese strategy.

First and foremost, the Feitoria is now built by the Nau, a Caravel replacement, which means your Builders no longer have to brave the waves and cross the oceans anymore. The construction of Feitorias, therefore, is reliable, fast and efficient. Furthermore, Feitorias can now be constructed in territory of both city-states and any civilizations with whom you have Open Borders (this means using war as a way to gain the right to build Feitorias will not work). Due to their unique nature, being the only improvement that has to be built in foreign territory, the Feitorias come with a few quirks:

When combined with the Portuguese civilization ability, each Feitoria actually grants 6

Trade Routes. Remember, because there is a strict restriction on where Portugal can send their

Trade Routes, it is useless to place Feitorias where you can't send

Trade Routes to. However, since the Feitoria has to be built next to a bonus or luxury resource, including water resources, use it to strategically block good Harbor locations of the opponents' coastal cities. As long as those cities are directly on the coast, you can still send

Trade Routes to them even without them having Harbors, so this will not hurt you. Also, use Feitorias to block Kampung and Polder placements if Indonesia and Netherlands are in the game. Although you can always build Feitorias in city-states' territory as long as you are not at war with them due to João's ability, it is probably best to save the

build charges for a major civilization. Since city-states' infrastructure is often underdeveloped, sending

There are certain games where there are not a lot of spots inside cities of major civilizations where you can put Feitorias, a fun but niche strategy in this situation would be to create an artifical Feitoria city. First settle a city with plenty of space for Feitorias (ideally this city spot should be within the trade range of many of your cities, and only close to one other empire, so that you can later nullify the Loyalty pressure from that empire by a Cultural Alliance), pre-plan where to place them, purchase the tiles necessary for the Feitorias, position enough Naus close to the designated Feitoria tiles and then hand the city over to a your trading partner and form a Cultural Alliance with them. Then, move your Naus in and proceed to place as many Feitorias as possible. This, in addition to the Wisselbanken policy card and the Democracy government, allows every

Trade Route to this city to yield significantly more both

The feitoria – literally “factory” – was a trade depot set up overseas to facilitate trade, and, as such, it was a key institution of early mercantilist projects, especially the Portuguese networks of the early modern period (1300s-1600s). Here, European merchants could exchange goods in a space protected by European arms, operating with some degree of independence from the local ruler – and local pirates. Feitoria had a dark side, however: non-Europeans were not allowed to own land within one, and, later, they were key outposts of European colonization. Worse, the feitorias were key outposts in the trafficking of enslaved people.

The first Portuguese feitoria was in the North African country of Mauritania, but later outposts were in Goa (in India), Malacca (in present-day Malaysia), Ternate (present-day Indonesia), Macau (in China), and Nagasaki (in Japan). In each spot, the Portuguese left their mark: Malacca and Goa have sizeable Catholic populations, Macau has impressive architecture left over from the Portuguese period, and bakers in Nagasaki still make Portuguese-style castella (kasutera, in Japanese) cakes. 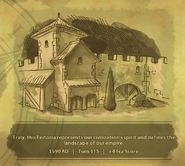 Historic Moment for building the Feitoria
Community content is available under CC-BY-SA unless otherwise noted.
Advertisement