Building of the Modern Era

The Film Studio is a unique building of the American civilization in Civilization VI. It is built in the Theater Square district and replaces the Broadcast Center.

The Film Studio is a unique building that plays to one of America's greatest strengths. Any city that builds it doubles its

Tourism output to civilizations that have reached the Modern Era, allowing the Americans to catapult toward a Culture Victory in the later stages of the game. With the Satellite Broadcasts policy card, a city with a Film Studio and some or all of the wonders that hold

Great Works of Music (the Bolshoi Theatre, Broadway, and the Sydney Opera House) can become a world-class tourist destination.

Whether you're playing the vanilla version of the game or the expansions (i.e. with or without World Eras), the Film Studio doubles your

Tourism output only against civilizations that have discovered at least one Modern Era technology or civic. Therefore, this is a rare unique building that is pointless to rush, since its uniqueness is based on a condition that you don't have to satisfy. Overall, you are much better off entering the Modern Era from the bottom half of the tech tree rather than the top half - more specifically, you should enter the era with Steel. This will maximize your chances of getting the Eiffel Tower, which is an extremely powerful wonder in the hands of Teddy Roosevelt and will also boost Flight (the prerequisite for Radio) when constructed.

The “Black Maria,” a tarpaper-covered shack in West Orange, New Jersey, built by Thomas Edison in 1893 AD, might generously be termed the first “movie studio”; there Edison used film to capture the antics of vaudeville and theater actors to show to the public in penny arcades, unused theaters, and fairground tents. In 1909, Edwin Thanhouser leased an old skating rink and made commercial films, some 1086 between 1910 and 1917. Meanwhile, in Europe, studios such as Pathé (France), Münchner Lichtspielkunst AG (Bavaria). Mosfilm (Russia) and Ealing Studios (UK) were being founded. But, for unexplained reasons, a number of studios sprouted up in and around Los Angeles (the best explanation being that natural sunlight was the best for the crude movie cameras of the time), the first being Nestor Studios in 1911. By 1920, there were a dozen in operation in the suburb of Hollywood cranking out film by the mile to feed civilization’s latest escapist addiction. Although film studios are largely passé (most production taking place “on location”), some remain in operation in odd corners of the globe. 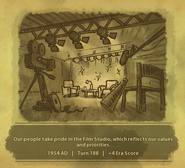