Fresh water. Land combat units that enter it receive the ability 'Water of Life' (+10 HP healing in any territory).


"Chyavana, desirous of obtaining beauty, quickly entered into the water. The twin Aswins also, O King, sank into the sheet of water. And the next moment, they all came out … in surpassingly beautiful forms, and young."
– Anonymous

Wikipedia has a page called:
Fountain of Youth

The Fountain of Youth is a single-tile passable natural wonder in Civilization VI that was added in the Maya & Gran Colombia Pack. Its tile provides 4

Faith, as well as fresh water, and +2 Appeal to adjacent tiles. Land units that enter the Fountain of Youth receive the ability "Water of Life", giving them +10 healing in any territory.

In Civilization VI: Rise and Fall, discovering the Fountain of Youth grants +1 Era Score, or +3 Score if the player is the first to do so.

The Fountain of Youth is fantastic if you settle near it in the early game. Its

Faith bonus is good for getting an early Pantheon, and for

Faith generation in general from adjacent Holy Sites. Its

Science bonus is great for early game research, and its healing bonus is decent for war.

The Fountain of Youth of legend is less of a cement or stone fountain, and more of a spring said to restore the youth of anyone who drinks or swims in it. The trusty Herodotus wrote about the fountain in the 5th century BC, and Alexander the Great allegedly found a healing river a hundred years later. Unfortunately, neither of them bottled up any of the water to help them later on in life when old age and wounds respectively took them to Hades. Over countless centuries, the myth persisted, and explorers such as Juan Ponce de Leon spent countless years searching for the mystical spring. If anyone has found it, they haven’t shared the secret with the world.

The Fountain of Youth intro cinematic

The Fountain of Youth, as seen in-game 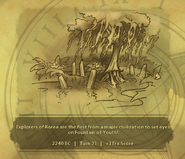 A civilization discovers the Fountain of Youth
Русский
Community content is available under CC-BY-SA unless otherwise noted.
Advertisement