Duke of Swabia, King of Burgundy, King of Germany, King of the Romans. King of Italy, Holy Roman Emperor

Combat Strength for all units when fighting city-states and their units.

Will try to conquer as many city-states as possible, and likes those who do not associate with them. Dislikes Suzerains of city-states, or civilizations that have conquered city-states.

Wikipedia has a page called:
Frederick I, Holy Roman Emperor

Frederick I (1122 – 10 June 1190), better known as Frederick Barbarossa, a nickname given to him by the Italians he often warred with, was Holy Roman Emperor from 1155 until his death. He leads the Germans in Civilization VI.

As in history, Germany under Frederick Barbarossa is a powerhouse that can threaten to overwhelm its foes with their productivity and military prowess.

Heroic Frederick, king of the Germans, your task is to forge the independent states that surround you into an empire. You are blessed to be a great military leader - use those skills to bring these cities under your sway so they may develop into commercial and industrial powerhouses. Surely then the bards will sing of mighty Frederick with the red beard, the great Holy Roman Emperor.

Frederick Barbarossa's unique agenda is Iron Crown. He does not like civilizations that are Suzerains with or have conquered city-states, since he would like to conquer them, and likes those who do not associate with city-states.

His leader ability is Holy Roman Emperor. It provides him with an additional

Districts many turns earlier than their foes. Nearby city-states can easily be absorbed into Frederick's "Holy Roman Empire." Look for him to attack a city-state with fertile lands and resources rather than trying to spend the time to woo it diplomatically. In the Modern era, Germany adds the U-Boat, a premier unit designed to economically disrupt their foes. With their heavy industrial base, Germany can then press forward to victory on any front that they choose.

Frederick Barbarossa is voiced by Bert Coll. He speaks Middle High German, the main language of the Holy Roman Empire (other than Latin).

Invitation to Capital: I will show you our great capital if you tell me how yours can possibly compare to Germany's seat of power.

Invitation to City: As the Holy Roman Emperor, I welcome you to our land. If you wish, you can see some of its glory in the nearest city. Unless, of course, they are rebelling again.

Rejects Player's Declaration of Friendship: No, I cannot accept your friendship, for the good of the Empire.

Accepts Player's Declaration of Friendship: A strong ally is the greatest friend. Let us live in peace.

Requests a Declaration of Friendship: Again we extend our hand, but this time in friendship. Will you accept it?

Player Accepts His Declaration of Friendship: Thank you, friend.

Player Rejects His Declaration of Friendship: Perhaps next time, then.

Denounced by Player: I should answer you with my sword… perhaps I will.

Denounces Player: The world will know of your treachery. And you will be judged.

Accepts Delegation from Player: Your envoy arrived and I welcomed them personally. Our Empire could benefit from diplomacy.

Rejects Delegation from Player: No, of course not.

Sends Delegation to Player: We have sent a diplomatic envoy to you. Treat them as you would treat me, the Duke of Swabia, King of Burgundy, King of Germany, King of the Romans, King of Italy, and Holy Roman Emperor.

Accepts Player's Open Border Agreement: I will allow it, for the good of Germany, I hope.

Rejects Player's Open Border Agreement: I was not born a fool, to allow my enemies passage through my lands.

Requests Open Border Agreement: I must move my army through your land. Will you allow it?

Too Many Troops near His Border: If you think we are blind to your army, you are naive. Move them away from Germany, or suffer the consequences.

Frederick (later given the sobriquet “Barbarossa” by the unruly Italians he tried to rule) gathered titles like he gathered enemies. By his death in June 1190 AD, he had quite a few of each. When he was done, he’d beaten all challengers... save a distant swift-flowing river. Historians consider him one of the greatest – if not the greatest – medieval Holy Roman Emperors (well, he was the first). Compared to his peers, Frederick Barbarossa’s longevity, ambition, organizational ability, battlefield prowess, political acumen and focused ruthlessness make him seem nigh superhuman in an age civilization refers to as “dark.”

Born in 1122 into a family that claimed descent from Charlemagne, Frederick was heir to the Duchy of Swabia – one of some 1600 minor duchies and city-states that made up “Germany” – which he took over as ruler in 1147. Being the restless sort, shortly afterwards the new duke accompanied his uncle Conrad III, King of Germany, on the ill-fated Second Crusade. Whereas the French decided on a safer if longer route to the Holy Land, Conrad made to march straight through Anatolia, where his force was decimated at the hands of the Seljuk Turks in the Battle of Dorylaeum and then retreated to the coast, whereupon most of the survivors deserted to make their own way home. But, steadfast Frederick distinguished himself and showed an aptitude for bloodletting. Thus, when Conrad died in 1152, he anointed Frederick his successor rather than his own son (who was, after all, only six years old).

On 4 March, Frederick was crowned “elected” King of Germany at Frankfurt; five days later, he was crowned King of the Romans in Aachen (not that the Romans particularly wanted him, hence the coronation in a German city). Germany was at the time a squabbling patchwork of princes, dukes, and other feckless royalty claiming holdings ranging from large regions such as Bavaria to some too small to pinpoint on a map (if there were any decent maps to be had). Frederick realized that the only way to restore order was to give them a common goal... the enforcement of German imperial rights in Italy. And, rather than curtail feudalism as was occurring in other realms, he sought to restore it fully and thus bribe the German lords with lavish concessions.

If Frederick wanted to restore the Germans to the glory they had enjoyed under Charlemagne and Otto the Great by running roughshod over the Italians, however, he needed to pamper the papacy. Besides, Frederick wanted to annul his loveless, and more importantly childless, marriage with Adelheid of tiny Vohberg. In March 1153 he concluded the Treaty of Constance with the Pope Eugene III, whereby Frederick pledged to defend the papacy, make no peace with Sicilians or other enemies of the true church, and retake Rome from uncivil republicans. And he got rid of Adelheid.

Now with an excuse and the blessings of the Holy Father, Frederick marched south October 1154. First he beat Milan into submission, then sacked and razed stubborn Tortona. Frederick received the Iron Crown, and was thus made King of Italy. Pavia, Bologna, Tuscany, soon enough he approached Rome itself. There he met with the new pope, Adrian IV, in the Vatican. The next day, 18 June 1155, Adrian crowned Frederick I as Holy Roman Emperor in St. Peter’s Basilica amidst the cheering of the German troops and the stony silence of the Romans. The ungrateful locals soon began rioting, and Frederick spent his coronation day bringing peace to the city, at the cost of a thousand dead Romans. Having had a fine first Italian tour, Frederick headed back to Germany with the pope in tow, attacking Spoleto and meeting with an embassy from the Byzantine Emperor along the way.

Upon his return, Kaiser Rotbart (as the Germans called him) found the nobles engaged in their hereditary shenanigans. He settled the unrest with his usual delicacy – by switching the titles and holdings around so that the princes and dukes would lack the support of their new subjects. Thus, for instance, Frederick transferred the Duchy of Bavaria to his cousin, who was Duke of Saxony at the time, and made the former Duke of Bavaria the new Duke of Austria. And so forth. Along the way, he married Beatrice of Burgundy in 1156, thus making him King of Burgundy in 1178.

No rest for the wicked, as they say. Emperor Frederick Barbarossa led four more invasions into Italy (in 1158, in 1163, in 1166, and in 1174), mostly to sort out – repeatedly – who should sit upon the Chair of Peter. He also intended... several times... to deal with the issue of Norman Sicily, but kept being distracted by revolts in northern Italy and unrest in the Rhineland. In the fifth expedition into Italy, where he was opposed by the Lombard League, which included not just various Italian cities but Sicily and Constantinople as well, the now ageing but still formidable Frederick was defeated at the Battle of Alessandria in 1175. Europe was shocked. When the German dukes refused to bring help, Frederick was decisively beaten at Legnano near Milan in May 1176. The Holy Roman Emperor had no choice but to agree to the Peace of Anagni, by which he recognized Alexander III as pope.

Frederick spent the next decade “peacefully”... getting revenge on the German dukes (including his cousin) who had failed to support his venture into Italy, and putting the Italians in their place yet again by joining forces with local rural nobility in reducing several uppity Tuscan cities. But it seems the old warhorse was restless. He certainly wasn’t soft. In 1189 AD, he joined the Third Crusade, along with France’s King Philip II and England’s King Richard I, at the beckoning of the new pope. But he never made it to face Saladin, for he drowned in June 1190 trying to cross the Saleph River on his horse rather than use a crowded bridge. In some way, a fitting end to Barbarossa (too bad about the horse, though). 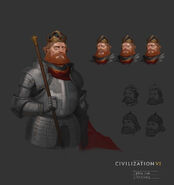