Combat Strength when fighting units with a higher base

Wikipedia has a page called:
Gaesatae

The Gaesatae is a unique melee unit of the Gallic civilization in Civilization VI. It replaces the Warrior.

The Gaesatae is an extremely powerful replacement for the Warrior. Their combat bonus against

District defenses makes them ideal for an early rush against a neighbor, and their bonus against stronger units will allow that conquest to be drawn out even in spite of a

Combat Strength, the Gaesatae can be quite a menace to deal with in the early game, even for civilizations with strong early unique units like Sumeria or the Aztecs.

The highlight of this unit lies in its 10

Combat Strength. This makes it especially strong against Spearmen and Heavy Chariots, whose

Combat Strength after the bonus is factored in; even War-Carts and Eagle Warriors pale in a one-on-one combat against a Gaesatae. It also receives 5

Districts, which will be elevated to 7

Combat Strength if the

District is garrisoned, thanks to Ambiorix's ability. These two bonuses combined make the Gaesatae a prime unit for early rushes. Beeline for Archery and Craftsmanship at the same time to unlock Archers and the Agoge policy card. The main drawback of the Gaesatae is that its

Production cost is 50% higher than the normal Warrior, so this policy card is vital. Try to get at least 3 Gaesatae and 3 Archers, or you can flexibly lower the number of Archers and train more Gaesatae if the situation calls for it, since these two units have relatively similar

Production cost. Use the Gaesatae as the frontline and try to keep your army close together when your units are carrying out attacks to maximize the horde-based bonus from Ambiorix. However, this rush may not work too well against civilizations with good early

Production, since all your enemies need to do is to train Warriors. Warriors fight Gaesatae on equal footing if you don't take into account

Combat Strength from Ambiorix, despite being a lot cheaper.

Before the April 2021 Update, the Gaesatae upgrades into the Musketman, which leaves a gaping void between the Ancient Era and the Renaissance Era in the frontline of the Gallic army, forcing them to train either cavalry units (which don't benefit from Ambiorix's ability), or anti-cavalry (which don't have pre-existing

Promotions from fighting earlier). However, this update, despite having no direct changes to Gauls, brought forth a change that shakes up the entire Gallic arsenal. The Man-At-Arms enters the fray at Apprenticeship as an intermediate unit between the Swordsman and Musketman, and the Gaesatae now upgrades into this new unit. What appears to be another weakness of the Gaesatae is that they cannot upgrade into Swordsmen, instead upgrading into Men-At-Arms. And thanks to the Gallic Oppidum, which instantly unlocks Apprenticeship, the Gaesatae will be able to quickly upgrade into Men-At-Arms, way before any other civilizations can, allowing them to extend their militaristic prowess long past the relevancy of the Gaesatae. When combined with Ambriorix's bonus

Culture upon training a military unit, the Gallic war machine can be unstoppable if they hit all their timing correctly. Due to the obvious lack of

Gold income, Gauls may have a hard time pre-building a lot of Gaesatae to upgrade them into Men-At-Arms, so the best way to field Men-At-Arms for Gauls is actually the conventional method. The extra

Production from all the Mines and Apprenticeship, plus the

Production from the Oppidum, makes it an achievable task. Also, every Man-At-Arms trained grants you 32

Note that the Gaesatae's bonus against units with higher base

Combat Strength applies on both offense and defense. Also, the comparison will always be drawn between the Gaesatae's base

Combat Strength of 20 and the other unit's base

The Gaesatae were Celtic warriors from the Alps. In the early days of the Roman Republic, Rome was expanding northward, taking formerly Gallic land and giving it to poorer Roman families. Worried about this expansion, a group of tribes from Cisalpine Gaul – the northern part of Italy – banded together and hired the Gaesatae to defend them. Armed with spears and javelins, the Gaesatae (according to Greek historian Polybius) fought naked, with nothing but their weapons. Polybius writes that the Gallic army made a “dreadful din, for there were innumerable horn-blowers and trumpeters, and, as the whole army were shouting their war-cries at the same time, there was such a tumult of sound that it seemed that not only the trumpets and the soldiers but all the country round had got a voice and caught up the cry. Very terrifying too were the appearance and the gestures of the naked warriors in front, all in the prime of life, and finely built men.” The strange Gallic costume (or lack of costume) may have been because of their sheer confidence in battle or may have just been a practical measure to keep from getting caught in the brambles. Regardless of why they fought nude, the Gauls won the first few battles, but a better-prepared Rome won the war. Perhaps armor was a good idea after all. 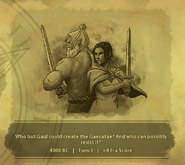 Historic Moment for building the Gaesatae