Gajah Mada (c. 1290 AD – 1364 AD), translated as Elephant General, was a powerful military leader and mahapatih or prime minister of the Majapahit Empire, credited with bringing the empire to its peak of glory. He delivered an oath called Sumpah Palapa, in which he vowed not to enjoy the pleasures of the world until he had conquered all of the Southeast Asian archipelago of Nusantara for Majapahit. He leads the Indonesians in Civilization V: Brave New World.

Gajah Mada speaks Old Javanese, although there may be some words derived from the Modern Javanese language in his lines. On his diplomacy screen, he is standing in what appears to be a rice paddy, with kris sword in hand, with dense jungle on low lying hills cloaked in fog with a candi in the background. Gajah Mada's design is clearly based on the statue in front of the Telecommunication Museum in Jakarta, Indonesia, with only a slight difference on the belt.

Gajah Mada may attempt any victory condition, but prefers to go for a cultural victory.

Gajah Mada likes to expand his empire, and is very keen on building a strong naval fleet. As such, the Indonesians will have some of the better water connections.

Faith and may spread his religion aggressively.

Apart from his focus on religion, Gajah Mada puts a priority on developing his economy and

Culture, as well as

Happiness. He will also try to build several wonders.

Gajah Mada is one of the bolder leaders, as well as one of the less loyal ones. While he can, at times, be hostile, he is not quite a warmonger. He may also backstab his allies, so befriend him with caution.

Gajah Mada likes to befriend and protect city-states. He will almost never try to conquer them, but he will often bully them.

On some occasions, Gajah Mada will try to build new cities right next to other players'

Capitals, which will allow him to take advantage of his unique ability on certain maps. If your

Capital is on an island, be sure to expand your borders so that he cannot get a water connection by your side.

Gajah Mada (loosely translated as the "Elephant General"), hero to the people of Indonesia and symbol of national pride and patriotism, served as Prime Minister of the Majapahit Empire of Indonesia for the better part of the 14th century AD. Although little information exists as to his early life and upbringing, it is known that he was born a commoner, rising to power based solely on his intellect and cunning - along with a renowned ferocity in battle. Serving as a royal bodyguard, Gajah Mada was instrumental in quashing a rebellion against his king, and was rewarded with a path to joining the ruling elite. Eventually rising to the position of Prime Minister, Gajah Mada led the Majapahit Empire to great success in conquering many of the neighboring island kingdoms, becoming the first to unite much of the territory that encompasses modern Indonesia.

The earliest records of Gajah Mada's life begin in adulthood, when he is said to have served as commander of an elite guard unit entrusted with protecting the royal family of the Majapahit Emperor, Jayanagara (1309-1328 AD). During this period, a rogue Majapahit political officer known as Rakrian Kuti lead a rebellion against King Jayanagara. Learning of the plot, Gajah Mada safely escorted the king out of the capital city, which fell to Kuti's forces, and into hiding in the nearby city of Badander. Once the king was secure, legend has it that Gajah Mada spread rumors of the king's death to disrupt the rebellion, while organizing a group to retake the capital and reinstate the rightful king. Gajah Mada found that many of the military caste were dismayed by the king's supposed death and that Kuti was unpopular among the people. In the ensuing counter-insurrection, the upstart Kuti was killed, and Gajah Mada was rewarded for his efforts with his first leadership position within the ruling party.

Some years later, according to legend, Gajah Mada's loyalty waned when the king took Mada's wife as a concubine. In the tale, Gajah Mada convinced the court physician, a one-time supporter of Kuti, to kill the king when he fell ill; upon the king's death, Gajah Mada promptly had the physician arrested and executed. Whatever the truth in the tale, following the death of Jayanagara, his step-sister Tribhuwana Wijayatunggadewi ascended the throne with ambitions to expand the reach of her empire. Fortunately for Gajah Mada, his role in this expansion was considered integral by the new queen, and he was named mahapatih, or Prime Minister, in 1329 AD. With sweeping powers and new authority, Gajah Mada set his sights on the far-flung reaches of the archipelago, vowing great things for the empire that entrusted him with its future. His famous oath, known as the Sumpah Palapa - often the subject of varying interpretations - declared in the most basic terms "I will not indulge in the fruits or spice, the earthly pleasures, until all of the known islands are conquered for the Majapahit."

Following Gajah Mada's return in 1331 AD from suppressing a rebellion in Sadeng (eastern Java), it wasn't long before he launched his campaigns to conquer the neighboring islands of the Indonesian archipelago, beginning with Bali and Lombok in 1343. One by one he captured kingdoms and cities, states and provinces, all for the glory of his people. These included the Buddhist kingdom of Sriwijaya in Palembang and small kingdoms in West Sumatra, where Gajah Mada installed a Majapahit prince as a vassal ruler. The Elephant General then conquered Samudra Pasai in Sumatra, the first Muslim sultanate in Indonesia. Following this victory, in the span of two years Majapahit forces overran another half-dozen independent cities and kingdoms, including Temesek (now known as Singapore) across the straits.

Tribhuwana abdicated the Majapahit throne in 1350 AD in favor of her son Hayam Wuruk, considered the greatest of the kings of the Majapahit. During his reign the empire reached its greatest extent, encompassing the whole of the Indonesian archipelago. Trade and the arts flourished under the king. The new king was content to leave the affairs of the nation to his prime minister, while he himself patronized the arts and sciences. With the tacit support of the king, Gajah Mada proceeded to add two dozen kingdoms to the empire, some as far away as modern-day Malaysia and the southern Philippines.

Having conquered more than a dozen islands within the archipelago by 1357, Gajah Mada found himself in a difficult position, with one of the last remaining independent kingdoms being the Sunda in West Java. Although plans had been laid for the princess of the Sunda to marry the Hayam Wuruk, forming an alliance, Gajah Mada sought to press the Sunda further. By denying that the Sunda princess would become Queen Consort of Majapahit and instead be only a concubine, Gajah Mada enraged Sunda sensibilities. In meeting the wedding party at the town of Bubat, the negotiations degenerated into open hostility, and a skirmish ensued. Gajah Mada and his forces massacred the entire Sunda royal family and its bodyguard.

The incident marred the legacy of Gajah Mada as his actions were seen as reckless and heavy-handed. Majapahit ministers and courtiers condemned him as bloodthirsty and brutal. The king stripped Gajah Mada of his titles, authority, and honors. The once most-powerful man in the empire would spend the rest of his days in relative solitude at his remaining estate in East Java. Gajah Mada would die in relative obscurity in 1363 AD.

In modern Indonesia, Gajah Mada is viewed as a hero - a symbol of Indonesian patriotism and national pride. Gajah Mada is seen as an inspirational figure, one who exemplifies the potential greatness of all Indonesians. He would serve as a mythic propaganda symbol during the resistance to Japanese occupation and the ensuing revolt for independence from Dutch rule in the late 1940s. His legacy as the first to unite the many islands of the Indonesian archipelago into one nation will stand throughout history - as will his renowned dedication and unwavering loyalty to his king and the Majapahit people.

Honor be with you, oh great hero Gajah Mada, prime minister of Majapahit and uniter of the Indonesian archipelago. The stories of your heroism on the battlefield are bested only by the legends of your sworn oath to unite the far-flung islands of Indonesia under one banner. Serving your queen and empire with loyalty, you not only strive to fulfill your oath and conquered any who stood in your path, but you succeeded in capturing what was then the entirety of the known archipelago, the first to unite what is today modern Indonesia.

Mighty warrior Gajah Mada, your people yearn for a strong leader who can return them to prosperity! Will you set out to conquer the neighboring kingdoms, further expanding your glory of your empire? Will you build a civilization that can stand the test of time? 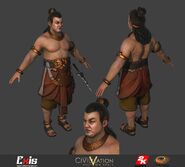 Statue of Gajah Mada at the Telecommunications Museum in Jakarta, which is the inspiration for his in-game design.
Русский
Community content is available under CC-BY-SA unless otherwise noted.
Advertisement