"The natural history of this archipelago is very remarkable: it seems to be a little world within itself."
– Charles Darwin

The Galápagos Islands are a two-tile impassable Natural Wonder in Civilization VI. The Islands may be found on Coast tiles. Each Wonder tile provides +2

Science and +2 Appeal to adjacent tiles.

In Civilization VI: Rise and Fall, discovering the Galápagos Islands grants +1 Era Score, or +3 Score if the player is the first to do so.

Science to adjacent non-wonder tiles (see diagram). However, as with all impassable wonders, the individual wonder tiles offer no benefits, and cannot be developed or improved. The Islands are usually most effective when they are near the outskirts of a city (or even slightly beyond its borders), since the wonder tiles themselves are functionally dead space. If a city is strategically placed in this fashion, it receives the adjacency benefits of the wonder without sacrificing valuable space.

Islas Galapagos were first visited by a European when the Spanish Bishop of Panama, Fray Tomás de Berlanga, was blown off course on his way to Peru in 1535 AD. No one paid much attention again to the isolated equatorial archipelago until 1835 when the HMS Beagle, with a young naturalist named Charles Darwin aboard, happened by while charting approaches to Pacific harbors. Darwin wandered about Charles Island and noted that the tortoises there differed from those on other islands in the chain. Once he could cut them up, Darwin also found, despite distinct variations, a single species of finches on the islands. Thus originated the Origin of the Species … and mankind’s understanding of just about everything biological (not to mention spiritual) would never be the same afterward.

The Galápagos Islands, as seen in-game 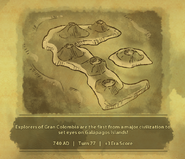 A civilization discovers the Galápagos Islands