Melee unit of the Industrial Era

Combat Strength when fighting on your capital's continent.

Wikipedia has a page called:
Imperial Guard (Napoleon I)

The Garde Impériale is a unique melee unit of the French civilization in Civilization VI. It replaces the Line Infantry.

In the Gathering Storm expansion, the Garde Impériale requires 10

France is a culture-driven civilization, and as everyone knows you have to be able to defend yourself to win. Since the Garde Impériale gets a combat bonus when fighting on your home continent it makes it an amazing defensive troop. The best strategy for these guys is to make one for each city and a few extra as support. If anyone tries to attack you, spread out your extra troops to the areas in most need of help and make sure your

Capital is well defended. Every time you successfully kill an enemy, you will gain

Of course, the Garde Impériale's special combat bonus is active not only in your lands, but on your entire home continent. This gives the French player some...interesting opportunities for expansion. An aggressive neighbor aspiring to smash the weak culturally-oriented civ that only thinks about wonders and Great Works will hardly expect a devastating retaliatory strike with a newly-earned Great General!

From a small cadre of veterans under the direct command of Napoléon Bonaparte, formed in 1799 from the union of the Guard of the Directory and the Grenadiers of the Legislature (both of those effete democratic bodies soon enough done away with by the emperor), the Garde Impériale grew during the Napoleonic Wars to be a division strong. The Garde was divided into three echelons depending on experience: the Old, the Middle and the Young. Napoleon favored his Garde, giving them higher pay as well as better rations, equipment, and living quarters. Nonetheless, the Old Guard were outspoken in their complaints, often directly to Napoleon himself, earning them the nickname les Grognards (“the grumblers”) among the rest of the French troops. Serving in every campaign during the wars, at Waterloo they were committed in desperation to secure a victory, but the Middle Guard retreated (for the first and only time) under withering fire; the Old Guard and some Young Guard units stood their ground to cover the Emperor’s withdrawal, only to be virtually annihilated by the British and Prussian cannon. Thus came to an inglorious end the most elite (according to the French and to wargame designers) of all military units in history. 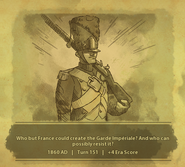