"Here the dark brown amorphous basalt, there the red ochre, and below that again the slender but distinct lines of the wood-coal."
– Dublin Penny Journal

Culture and 2 Appeal to adjacent tiles.

Whenever a land combat unit, except Warrior Monks, moves adjacent to the Giant's Causeway, it receives a one-time "Spear of Fionn" bonus, permanently increasing the

Combat Strength of the unit by +5.

In Civilization VI: Rise and Fall, discovering the Giant's Causeway grants +1 Era Score, or +3 Score if the player is the first to do so.

Like most Natural Wonders that grant unit bonuses, building a city close to the Giant's Causeway is a good idea, if only to keep other civilizations (or worse, barbarians!) from using it.

While the causeway is impassable, it is not a mountain, and ranged units can shoot over it.

Clusters of geometric columns known as the Giant's Causeway can be found along the coast of Northern Ireland. The columns vary in height, like a pipe organ that got away from itself. The columns closest to the coast disappear into the North Channel, while others jut out of the ground like basalt palisade walls. Legends claim the causeway was built by Irish giant Finn MacCool, who had been challenged to a fight by Scottish giant Benandonner. (Geologists disagree, connecting the pillar formation to volcanic activity 50 million years ago.) 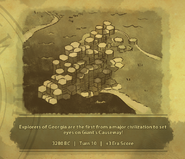 A civilization discovers the Giant's Causeway