"Then weave the web of the mystic measure;
From the depths of the sky and the ends of the earth,
Come, swift Spirits of might and of pleasure,
Fill the dance and the music of mirth."
– Percy Bysshe Shelley

Production. Each Gobustan Wonder tile increases the Appeal of adjacent tiles by +2. It has the 2

Movement cost, but not the defensive bonus of Hills.

Discovering Gobustan grants +1 Era Score, or +3 Score if the player is the first to do so.

Gobustan provides an impressive bonus to

Culture and a meager bonus to

Production. It is highly valuable to Cultural Victory seekers, and also makes an excellent site for a National Park later in the game.

The Gobustan National Park in Azerbaijan is home to a rich assortment of ancient artifacts – some of which are natural, and others left by people lost to history. Beyond the rock carvings of hunters and their prey, and past the Gaval Dash – a unique stone that can be used to produce music – visitors can find hundreds of mud volcanoes.

Mud volcanoes, unlike traditional volcanoes, spew only mud, water, and gases. As their activity is free of magma, mud volcanoes tend to be quite cold. Though these are typically not dangerous – aside from the strong smell of methane – mud volcanoes may occasionally erupt in toxic gas or flame.

Visitors to the Gobustan National Park may leave a bit muddier than when they arrived, but they receive a rare view of the lives of prehistoric people as well as some marvels of nature. 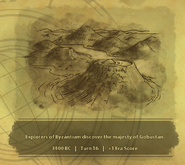