Culture if adjacent to a City Center
+1

Culture if adjacent to an Entertainment Complex
+1

The Golf Course is a unique tile improvement of the Scottish civilization in Civilization VI: Rise and Fall.

In theory, Golf Courses bring revenue and happiness to the cities in which they're built, as well as

Housing in the Information Era. For maximum

Culture bonuses, build them next to City Centers and Entertainment Complexes. Golf Courses raise the Appeal of adjacent tiles and can even be built on Tundra and Snow, which tend to have higher Appeal than other types of terrain. This can help the Scots create places for National Parks if they need

However, remember the main selling point of the Golf Course are the

Amenities, and because its (up to) 2

Culture per city is way too insignificant at this point of the game, don't go out of your way to build Entertainment Complexes, as they are often not worth your production and a district slot just for 1 extra

Culture. Also, City Center adjacent tiles are also often very valuable, because they are the site for many powerful Wonders, most notably the Forbidden City, and in order to maximize the number of tiles receiving the Appeal bonus, it is often advised to just ignore the

Culture bonus and build Golf Courses away from the City Center. By doing that, the Golf Courses still fulfill their sole purpose that Scotland cares about: supplying

Amenities without requiring citizens to work their tiles.

The biggest downside of this improvement is its Civic requirement. Reformed Church is the last civic on the religious (bottom) branch of the Civic tree. Since this is a leaf Civic, meaning it is the last civic of its branch and not required to unlock later Civics, most civilizations with no religious tendency will ignore all three religious civics: Theology, Divine Right and Reformed Church. Scotland, however, has to unlock all three civics that they have no interest in just to unlock their unique improvement, and the improvement is underwhelming to say the least. In your game, if you get lucky with multiple types of Luxury Resources, are able to build the all-important Colosseum and your empire is not too wide, all your cities can reach Ecstatic status even without the extra

Amenities from Golf Courses. Remember to constantly check City Status to see your

Amenity level, so that you can decide for yourself when to unlock the Golf Course. If your

Amenity is already at Ecstatic, there is no point in wasting your

Culture on unlocking the three religious Civics, you can leave it until later in the game when your cities cannot reach Ecstatic just on Luxury Resources and the Colosseum alone.

In Gathering Storm, the number of bonus

Amenities, which used to be 1, and Ecstatic requires 5

Amenities, which used to 3). This change to the

Amenity threshold makes the Golf Course, an already terribly underwhelming improvement, somehow manage to be even worse. While the April 2021 Update buffs a lot of weak improvements like the Kurgan or Nubian Pyramid, the Golf Course is curiously left out. The Golf Course is, therefore, undoubtedly, the worst unique improvement in the game, and were it not for the Aztec Tlachtli, it would have been the worst piece of unique infrastructure as well. Think of this similarly to the civilization ability of Korea: it only serves as an extension of your strongest ability, and should never be your focus in any situation.

There is one singular, undeniable historical constant: people have always enjoyed hitting balls with sticks. Scotland’s turf happened to be a perfect place to hit balls with sticks across large stretches of land. Thus “golf,” which means, “hitting a ball with a stick across a large stretch of land.” Golf courses became the stretches of land in question, frustrating generations of golfers with sand traps, lakes, the rough, and drops from highlands.

Golf (as played today) managed to survive and thrive despite various attempts at banning the sport, by people such as King James II (who the Scots rightly ignored) and even the Scottish Church, who did not want it played during holy days. The Church’s larger complaint was with golfers playing in churchyards, which were a very particular sort of hazard. 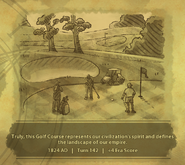