Building of the Renaissance Era

Amenity for every Luxury resource this city has improved.

The Grand Bazaar is a unique building of the Ottoman civilization in Civilization VI: Gathering Storm. It is built in the Commercial Hub district and replaces the Bank.

Anything a warmonger wants, the Grand Bazaar offers. With faster resource accumulation and an extra

Amenity per Luxury resource at a cheaper cost than a regular Bank, the Grand Bazaar adds more fuel to the conquest machine of the Ottomans. Most importantly, this building is available at just the right time to increase

Niter accumulation for the Janissaries and Bombards, bringing the Ottoman army into its Renaissance peak.

In details, the Grand Bazaar boosts resource accumulation speed based on the level of Strategic Resource diversity in the city. For example, if a city has 3 sources

Niter improved, all mines will receive only +1 resource per turn faster, since the level of Strategic Resource diversity is 1. If later you improve one

Oil source with an Oil Well, all improved

Oil sources will accumulate +2 resource per turn faster, regardless of the number of Mines and Oil Wells present. Similarly, extra

Amenities from Luxury Resources count the number of Luxury types, not the actual number of improvements. Resources, Strategic or Luxury, that are outside the 3-tile workable range or placed under a

District count towards diversity and benefit from this building as if they were improved with their respective improvements.

Overall, this is an incredible unique building, especially when you consider how underwhelming the Bank is compared to other tier 2 buildings in other

Districts. The construction of the regular Bank is often delayed until much later in the game since the building is neither strong or important, but the Ottomans should definitely put more emphasis on their Grand Bazaar. And the best thing about the Grand Bazaar is that it is 70

Production cheaper than the standard Bank. Standing at approximately three quarters of the

Production cost of the Bank, the Grand Bazaar represents the largest discount of all unique buildings in the game.

The Ottoman Empire is well-known for their military conquests, but they were also a center for craft and trade. Since the Empire stood at the crossroads of Europe, Africa, and Asia, they stood to profit from the trade that passed through their borders. They controlled important trade cities like Istanbul, Cairo, and Baghdad. The Grand Bazaar of Istanbul is probably the oldest continually-operating bazaar in the world, and is one of the most popular tourist attractions on the planet.

The word “bazaar” is Persian, and the oldest bazaars probably arose around caravansaries. A true bazaar takes place in a building, or under the cover of a permanent breezeway. A number of traditional bazaars are still found around the world, many of which still are vibrant, functioning markets, and some of which are UNESCO Heritage sites. Bazaars may be set up for the buying and selling of a single product, like grain or cloth, or they may be general markets where any number of things may be bought or sold.

Bazaars were central to urban life of cities in the Ottoman Empire and surrounding lands. The rituals of buying and selling goods and information have worked their way into many languages and cultures in that part of the world. 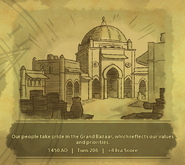