"Organisms don't think of [CO2] as a poison. Plants and organisms that make shells, coral, think of it as a building block."
– Janine Benyus

Science. Each wonder tile provides +2 Appeal to adjacent tiles and a major adjacency bonus to nearby Campuses and Observatories (but not Seowon).

In Civilization VI: Rise and Fall, discovering the Great Barrier Reef grants +1 Era Score, or +3 Score if the player is the first to do so.

Each Great Barrier Reef tile has a yield of 3

Science. Since Science is often hard to generate early in the game, incorporating natural wonder tiles can provide a vital head start through the tech tree.

Like ordinary Coast tiles, the yields of the Great Barrier Reef's tiles can be increased using certain bonuses. If the wonder tiles are owned by a city with a Lighthouse, Shipyard and Seaport, the yield of the tiles will increase by 1

Production bonus from the Shipyard only works in Gathering Storm.) The Suzerain bonus of the Auckland city-state also increases the tile yields by 1

Production, and by a further 1

Production once the Industrial Era has been reached.

Unfortunately, as with all natural wonders, the Great Barrier Reef tiles cannot be developed or improved. Because of this, natural wonders are sometimes more of a hindrance than an asset later in the game - a natural wonder in the heart of a city can spoil adjacency bonuses for districts. In general, passable wonder tiles are significantly better than an unimproved tile of any kind, but are often less productive than an ordinary tile with an improvement or a district. If the Wonder spawns directly adjacent to the Coast, it can be incorporated into a National Park.

Meandering about off the coast of northeast Australia, the 2300-km (1400-mile) Great Barrier Reef is the largest structure built by living organisms and can even be seen from orbit. Built by billions of coral polyps over a half-billion years, it now comprises some 2900 individual reefs and 900 islands, and is home to an incredible diversity of fauna – from 30 species of whales, dolphins, and porpoises to 215 species of birds. Unfortunately pollution, overfishing, tourism, and climate change are threatening the future of the reef; coral bleaching is accelerating and scientists estimate that unless drastic steps are taken, by 2030 AD the Great Barrier Reef will have suffered “irreversible damage”. 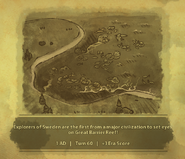