Defense Strength and 2 turns of fortification

Gold from each adjacent Great Wall
+2

Can only be pillaged but never removed by disasters

Wikipedia has a page called:
Great Wall of China

The Great Wall is a unique tile improvement of the Chinese civilization in Civilization VI. It can only be built in a line on the current border of your territory.

In the Zombie Defense game mode, the Great Wall deals minor (10 HP) damage to hostile units passing through or adjacent to it.

The Great Wall is a mediocre tile improvement in vanilla Civilization VI and Rise and Fall because it requires the highest level of commitment among all improvements, yet its yields are not always worth the investment. However, it puts on a completely different face in Gathering Storm, playing a key role in propelling China toward a fast Cultural Victory.

The Great Wall initially provides the same defensive bonus as a Fort, though it becomes available earlier and has more placement restrictions. As with all Fort-like improvements, it provides any unit on its tile with a +10

Combat Strength bonus on defense. This aspect is available a whole era earlier than the regular Fort, and since it is built by a Builder rather than a Military Engineer, it is quite a lot cheaper. Great Wall segments can't be built in neutral territory like Forts and other defensive improvements can, but building them at choke points can help China repel invaders with a smaller army than normal. The Chinese unique unit, the Crouching Tiger, complements the Great Wall quite nicely because of its defensive nature.

The Great Wall's initial yield is 2

Gold, plus an additional 2

Gold for each adjacent Great Wall segment. Since a Great Wall cannot be next to more than two other segments, this maxes out at +6

Gold, which is rather strong if you have suitable open land to put multiple segments in a line. You can even start putting down Great Wall segments right after unlocking it to boost your economy; however, you shouldn't go overboard because it doesn't provide the

Housing that cities need early on. The fun truly starts after you unlock Castles, as every Great Wall will provide 2

Culture for every adjacent Great Wall, which means as long as you can clear land and line up your Great Walls, each segment (except for the ones at the two ends) will provide 6

Culture as early as the Medieval Era. Therefore, Castles is a crucial checkpoint that China has to reach on the tech tree; meanwhile, on the civic tree, Feudalism needs to be beelined to unlock Serfdom. Depending on how long you can chain your Wall segments, you can unlock civics from this point onward at an incredible speed that can be matched by very few other civilizations. And of course, after researching Flight, Great Walls will start generating

Tourism, which is as much as a

Great Work of Music. Before the release of Gathering Storm, a Great Wall segment has no base yield and receives only +1

Culture from adjacent segments, meaning each one can only reach 2

Considering how important this improvement is to China, especially when you are aiming for a Cultural Victory, there are a few quirks with its placement rule that you should know. As with most other improvements, (all three types of) Floodplains block the placement of Great Wall segments, so Chinese cities should be founded along rivers that won't flood. Unlike other Fort-like improvements, however, the Great Wall can be placed on Volcanic Soil and cannot be removed by natural disasters, so areas near Volcanoes are very attractive for China. Also, since you can only place Great Walls along your borders, beware of the situation where you place a few segments of Great Walls, leave them for a while, and then cannot continue extending them since the borders have since expanded outward. This situation is especially pronounced with coastal cities, since their borders will always expand outward towards the oceans where you cannot place your Walls.

In the Zombie Defense game mode, the Great Wall functions like a Barricade and deals damage to Zombies and other enemies trying to approach China's cities, giving them a defensive edge.

A fortified border took on new meaning when some civilizations attempted to make sure the uncivilized stayed out. A number of empires built “great walls” – the Roman Hadrian’s Wall, the Chola-Pandya Madukkarai Wall, the Sassanid Great Wall of Gorgan, the French Maginot Line, and, of course, the Great Wall of China. Most were built of earth and stone, most incorporated natural terrain features (hills, rivers, and the like), and most had fortresses or garrisons scattered along their length. They were built in stages, sometimes over a long period of time. In terms of intent, none of these worked very well, for the outsiders managed time and again to “cross” the frontier walls, no matter how great. On the other hand, these great walls did provide a psychological sop to the empire’s citizens, and did deter the less barbaric barbarians from raiding the frontier settlements. With history having passed them by, most of the great walls have fallen into disrepair and obscurity … or become tourist traps. 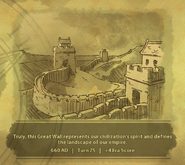