"Behold the wonders of the Heavens and Earth. The clear aqua blue serves as a looking glass, thousands of turquoise crows tinged with a touch of black."
– Nguyễn Trãi

In Civilization VI: Rise and Fall, discovering Hạ Long Bay grants +1 Era Score, or +3 Score if the player is the first to do so.

Each Hạ Long Bay tile has a yield of 1

Production. Since Culture is often hard to generate early in the game, incorporating natural wonder tiles can provide a vital head start through the Civics tree.

Like ordinary coast tiles, the yields of Hạ Long Bay's tiles can be increased using certain bonuses. If the wonder tiles are owned by a city with a Lighthouse and Seaport, the yield of the tiles will increase by 1

Gold respectively (in Gathering Storm, the Shipyard will provide 1

Production to each tile as well). The Suzerain bonus of the Auckland city-state also increases the tile yields by 1

Production, and by a further 1

Production once the Industrial Era has been reached.

Unfortunately, as with all natural wonders, the Hạ Long Bay tiles cannot be developed or improved. Because of this, natural wonders may be more of a hindrance than an asset later in the game - a natural wonder in the heart of a City can spoil adjacency bonuses for districts. In general, passable wonder tiles are significantly better than an unimproved tile of any kind, but are often less productive than an ordinary tile with an improvement or a district. However, if Hạ Long Bay spawns adjacent to the Coast, it can be used to make a National Park, and the Appeal bonus can help with adjacent park placement or other improvements like a Seaside Resort or Alcazar.

How many natural formations are featured in the creation myth of a nation? According the Vietnamese legend, it's here that the gods sent jade and jewel-spewing dragons who created the rocky islands dotting the bay and creating a defense against early Chinese invaders. In fact, the name means some variation of 'descending dragons,' or 'dragons descending into the sea.'

Hạ Long Bay is the name given to a collection of karst islets, natural limestone formations created after millions of years of erosion, featuring ridges, towers, and caves. To see and explore it today, is to trace a network of around 1600 limestone isles and caves stretching across 120 km of modern Vietnamese coastline.

As far back as 16,000 BCE, it was the home to early tribes of fishers, while throughout history, it has stood as a natural bulwark against invaders: in 1288, it would be the site of a Mongol defeat, where Vietnamese General Tran Hung Dao impaled Mongol ships on steel-tipped spikes, stopping their advance.

Since 2000, Ha Long Bay has been designated a UNESCO World Heritage Site. 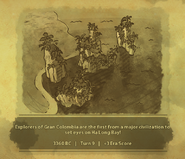