Wikipedia has a page called:
Hacienda

The Hacienda is the unique tile improvement of the Gran Colombian civilization in Civilization VI. It must be built on Grassland, Grassland Hills, Plains or Plains Hills tiles.

Arguably the least impactful piece in Gran Colombian toolkit, the Hacienda is more of a cherry on top for such a powerful arsenal than actual major component to victory. Unlocked in the Renaissance Era, the Hacienda is one of the latest unique improvements in the game, and it provides Gran Colombia with some welcome bonuses, but not necessary for a pure domination civilization. Since Gran Colombia can start their conquest as soon as the Classical Era (when they earn their first Comandante General), by the time the Hacienda is unlocked, they most likely have more cities than they ever need. The main goal is to keep these conquered cities loyal and happy, since when you have an ultra-wide empire from all of your conquering, not every single city needs to be at its most productive. The

Food component of this improvement, therefore, is decent but not as beneficial to Gran Colombia as it is for other, more peaceful civilizations.

Production are great for churning out and supporting a large army, but the amount provided by one Hacienda at this point in the game is not that impressive - not to mention Gran Colombia does not have a starting bias towards Plantation resources, and the

Production scaling at Rapid Deployment is too late to have a strong impact.

Overall, this is a decent improvement in theory for any civilization that will not go all-out in conquest mode, since it provides a lot of

Housing to build up mega-cities with high

Population; unfortunately, that is just not what Gran Colombia cares about. Put this improvement in your major

Capital or major cities that you just conquered, to keep them growing fast for extra yields, but again, your path to victory does not rely heavily on it. Of course, the Hacienda can be more useful if you have a peaceful approach with Gran Colombia and focus on building up your infrastructure, but this civilization does not have any major bonus towards any other victory condition outside domination.

Somewhere between a farm and a factory, the hacienda in Latin America was a large estate, held by a wealthy patron, that became the dominant mode of land ownership during the 19th century. Being located more inland than a plantation, and without the ready access to the sea, haciendas had to be agriculturally self-sufficient in addition to producing crops for export. In Gran Colombia, these crops could be coffee, coca, sugar, tobacco, or others.

The hacienda system was by its very nature exploitative. While the enslavement of African-descended people was more dominant in coastal plantations, the inland haciendas relied upon the dispossession of indigenous peoples. These people often labored unpaid and, in exchange for their labor, “permitted” to remain on hacienda land – land that had been, in many cases, taken from them or from their ancestors in the first place.

With the abolition of slavery, and with social and labor reforms in much of Latin America, the hacienda system has ended, although nostalgia-tinged farms or estates might still use the name. 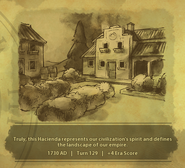