Production from each adjacent Resources.
+1

Production from every 2 adjacent district tiles.
+2

Production if adjacent to a Commercial Hub.

The Hansa is a unique

District of the German civilization in Civilization VI. It replaces the Industrial Zone.

The following buildings can be constructed in a Hansa:

Arguably the strongest weapon in the German arsenal, and one of the most revered pieces of unique infrastructure in the game, very similar to its counterpart in Civilization V: Brave New World, the Hansa turns Germany into a

Production powerhouse. In vanilla and Rise and Fall, just try to look for areas rich in resources (strategy, bonus, and/or luxury), settle your cities close together so that you can have a central core of multiple Commercial Hubs and multiple Hansas, and you will be off to a good start. In this respect, the Germans are very similar to the Japanese, since they also love closely-settled cities for high adjacency bonuses, so you can apply the experience you have playing as the Japanese here to get the maximum adjacency bonus out of the Hansa. When founding new cities, be sure to make them in pairs so you can place your Hansas and Commercial Hubs in a diamond position - place two Commercial Hubs near each other with one tile in between them, then place the Hansas in between them, adjacent to each other, to get a huge

In Gathering Storm, the basic Industrial Zone gets even stronger, since it now receives major adjacency bonuses from Canals, Dams, and Aqueducts, making the Hansa even more of a beast. The basics of this

District is unchanged, as you still need to prioritize settling in resource-rich areas, but now, with new adjacency rules in place, each Hansa can grant up to 50

Production if planned properly. Before, you can only get a decent Hansa if your cities are in resourch-rich areas (which is not a guarantee), and close to your other cities, but now, even a standalone city in an area with few resources can turn into a bustling

Production center with a bit of city planning.

The best thing about this is under Frederick Barbarossa, every form of government receives an extra

Military policy slot, which can always be dedicated to run Craftsmen, at least until Five-Year Plan (an

Economic policy card) is unlocked. Note that this strategic Industrial Zone planning is not exclusive to Germany, it can be used by any other civilizations, since only the major adjacency bonus from Commercial Hubs is exclusive to the Hansa. Mastering city planning with Germany is a good start when you try to improve your gameplay, especially in a Scientific Victory where

Production is key. Also, highly compact cities allows for efficient counterespionage, where only one Spy is capable of covering everything in a mega

From the Old French meaning “company of merchants,” the Hanse was a voluntary confederation of merchants and traders organized in a town for the protection and facility of commerce and transport. In the mercantile ports of the Baltic and North Sea these manufacturing and trading guilds became quite powerful and influential in the 13th Century, with their headquarters in complexes also known as the hansa. The largest hansa districts not only housed the administrative offices of competing guilds, but also storerooms, workshops, markets, banks and anything else that could turn a profit. The first such appears to have been built in Lubeck c. 1159 AD to facilitate trade between Western Europe and the resource-rich areas of northern Russia. 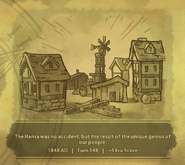 Historic Moment for building the Hansa
Community content is available under CC-BY-SA unless otherwise noted.
Advertisement