Harald "Bluetooth" Gormsson (c. 920 AD – c. 986 AD) was the King of Denmark from around 958 and King of Norway for a few years around 970. He was the father of his successor Sweyn Forkbeard (c. 960 – 1014) and is noted as the first Scandinavian monarch to officially accept Christianity. He leads the Danes in Civilization V.

Harald Bluetooth speaks modern Danish (with a Zealandian accent) instead of the Old Norse spoken in his time. On his diplomacy screen, he is standing on a Viking longship in the ocean. Instead of having the historically inaccurate horned helmet, Harald possesses a winged helmet that he wears during wartime and throws into the ocean when defeated.

Harald Bluetooth will attempt a domination victory most of the time.

Harald is quite an aggressive leader and can wage frequent wars, especially against weaker neighbors. Players should stay on guard if they have Denmark as a neighbor.

Harald likes to develop a strong navy, and his water connections are, on many occasions, some of the best ones. Starting in the Modern Era, he is likely to have a massive submarine fleet.

Harald also likes to raise a large offensive army. Expect him to have many Berserkers in the Medieval Era.

Harald often demands tribute from city-states, and will sometimes attack them.

Harald is one of the leaders that is relatively difficult to befriend. However, if you do manage to befriend him and earn his trust, you will have one of the most loyal allies. Besides, he is very tolerant of fellow warmongers.

Harald "Bluetooth" Gormsson was King of Denmark for nearly 30 years beginning in approximately 958 AD. During his reign, Bluetooth united the outlying tribes of Denmark and defended his people from the incursions of Norway and Germany, while overseeing the completion of vast construction projects that strengthened the defenses of his nation. Bluetooth is equally known for casting off the Norse pagan traditions of his forbearers, becoming a devout Christian who strove to peacefully convert the people of Denmark during his rule.

Although the precise date of Bluetooth's birth is unknown, based on records of his accomplishments while serving as king, it's assumed he was born sometime around 920 AD. The son of King Gorm the Old and Queen Thyra Dannebod, Bluetooth was a born and raised Viking in the truest sense. Throughout his early years, Bluetooth and his brother Canute (also known as Knud) set sail to pillage and plunder, returning to their father with the spoils of war. It is believed that Canute, the first born and favored son of Gorm, was killed in England while raiding near Ireland. Canute's death left Bluetooth as the sole heir to the throne of Denmark. With the death of Gorm in 958 AD, Bluetooth took up the throne and proved to be a capable leader both on and off the battlefield.

Shortly after the death of his father, Bluetooth consolidated his power and quickly moved on to unite the remaining discordant tribes of Denmark under one rule. Although his father Gorm is considered the first true King of Denmark, during his rule, the kingdom did not encompass the entire region, and independent tribes remained. Under Bluetooth, the entirety of Denmark, as well as parts of Norway and Sweden, fell under his rule. For a time, Bluetooth would even claim the title of King of Norway, although the extent of his authority there remains questionable.

Bluetooth commissioned a number of important construction projects throughout Denmark during his reign. In this time, "Runestones" were a common form of monument used to honor the dead and acknowledge their deeds, and Bluetooth saw fit to honor his parents in this way. Commissioning a second Jelling Stone - runestones found in the town of Jelling, Denmark - to memorialize his parents, Bluetooth created what is today considered the most well-known example of runic inscriptions in Denmark. Featuring an easily distinguished image of Christ on the cross, the Jelling Stone erected by Bluetooth is often referred to as the "Baptism Certificate of Denmark," signifying the end of the polytheistic traditions followed by much of the Danish population.

Aside from the Jelling Stones, Bluetooth was also responsible for the development of a series of six Viking ring fortresses, known as the "Trelleborg." After losing control of several outlying territories to various Germanic forces, Bluetooth ordered the construction of these forts in strategic locations across Denmark in response. Capable of housing up to 500 Danish warriors, these strongholds succeeded in warding off further losses and secured the interior of Denmark from future incursions.

Bluetooth's conversion to Christianity in approximately 960 AD is a point of contention among many modern historians, mainly due to variations in the story of how his conversion came to pass. The two most notable accounts of the event come to us from contemporary historians Widukind of Corvey and Adam of Bremen. Widukind wrote that Bluetooth was converted by a cleric known simply as "Poppa," who was either a guest of the court or a missionary who found his way to Denmark. Adam of Bremen (whose account was written some 100 years later) believed that Bluetooth had been converted forcibly by Otto I of Germany following a defeat in battle.

Regardless of how his conversion came to be, what we can say with certainty is that Harald became a devoted follower of Christianity, not only ensuring that Christian imagery was included on the Jelling Stone commemorating his parents, but also going so far as to remove his father's body from its traditional Viking burial mound and having it reburied under the church constructed by Bluetooth, where the Jelling Stones still stand today.

King Harald Bluetooth is generally viewed today as a just and wise king, having ruled Denmark for 30 some-odd years. He maintained the sovereignty of his country against the influences of several neighboring empires (despite some setbacks) while at the same time shaping the culture of his people for centuries to come. In the end, Bluetooth's own son, Sweyn, would rebel against him, forcing him to flee Denmark. After Bluetooth's death in 986 AD, Sweyn Forkbeard would take the throne and shape a notable legacy of his own.

Harald mentions Norse gods in his dialogue, despite historically being the first Danish Christian king.

Honor and glory be yours, Harald Bluetooth Gormsson, mighty heir of King Gorm the Old and Thyra Dannebod. Not only were you victorious on the battlefield against the armies of Norway, you also completed massive construction projects across the land - numerous Ring Fortresses to protect the populace from invasion and internal strife. You successfully drove off waves of German settlers in 983 AD and sheltered your kingdom from unwanted foreign influence.

Stalwart Viking, the time for greatness is upon you once more. You are called to rise up and lead your people to renewed power and triumph! Will you make the world shudder once more at the very thought of your great armies of Northsmen? Will you let the Viking battle cry ring out across the crashing waves? Will you build a civilization to stand the test of time?

Relief of Harald Bluetooth being baptized by Poppa the cleric 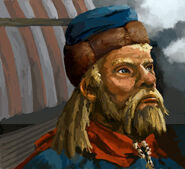