Combat Strength when attacking a unit adjacent to a Great General. +5

The Hetairoi is a unique heavy cavalry unit of the Macedonian civilization (when led by Alexander) in Civilization VI. It replaces the Horseman.

In the Gathering Storm expansion, the Hetairoi requires 10

Alexander brings another domination vessel to Macedon, arguably even more powerful than the Hypaspist, the Hetairoi. Unlike the Horseman it replaces, the Hetairoi is classified as a heavy cavalry unit, which means they can be upgraded into Knights. allowing them to stay relevant for much longer, and equipped with a

Promotion line much more suited for conquest. Also, they start with a free

Promotion, so you can choose either Charge (which increases damage against fortified defenders), or Barding (which increases defense against ranged attacks). Generally, since you will have a lot of Hetairoi for the purpose of domination, it is a good idea to mix and match the

Promotions, but it is worth noting that Marauding is a strong tier II

Promotion that can increase damage output against defensible

Districts have a garrison unit, and Marauding requires Charge.

With the Hetairoi, Macedon is also incredible at grabbing

Great Generals. Each kill performed by a Hetairoi results in 5

Great General points, on top of the fact that Macedon already loves building Encampments more than a normal Domination civilization, since they have a strong replacement for the Barracks that can be used for

Science, the Basilikoi Paides. Hetairoi also benefit twice as much from

Great Generals compared to other units. Besides the normal 5

Combat Strength when attacking a unit adjacent to a Macedonian

Great General. This is the awkward part, since the bonus doesn't function in the way the in-game tooltip describes. If the Hetairoi and the

Great General share the same hex, this shouldn't be a problem, since the Hetairoi's attacks are melee. However, if the

Great General stands behind the Hetairoi, and the Hetairoi attacks a unit in the front, since that enemy unit is not flanked by the

Great General, the Hetairoi only receives 5

Combat Strength from being near the

Great General, not necessarily a Classical one. Therefore, a Hetairoi can receive 5

Combat Strength when attacking a unit flanked by a Medieval

Great General, but, as expected, will not receive the normal 5

Movement from standing within 2-tile of that Medieval

Overall, the Hetairoi is an incredibly powerful unit, and they will form the heart of the Macedonian army. With a potential

Combat Strength of 46, by far the highest in the Classical Era, 5

Promotion with boosted experience gained from the Basilikoi Paides, this unit can be a nightmare to defend against. Also, in Gathering Storm, the Hetairoi uses

Iron like other heavy cavalry units, which is great since it won't compete against the contemporary Hypaspist in the same resource pool.

The powerful hetairoi (known simply as “the Companions”) were an elite cavalry unit who served as the hammer in Macedon’s famed hammer-and-anvil tactics, popularized under Philip II and used to great effect by his son, Alexander the Great. While the Macedonian phalanx pinned a rival army in place with their extra-long spears (known as sarissas), the hetairoi would organize into a wedge and charge directly into the enemy flanks or rear.

An abrupt attack by the shock cavalry nearly impossible to avoid or deter, and was often enough to break the will of less seasoned troops. As they fled for their lives, they were easy pickings for the hetairoi who could ride them down and dispatch them in their leisure.

Most of the Companions came from the ranks of Macedon’s noble families, though the king could technically admit anyone to their ranks. They were armed with short spears and swords. 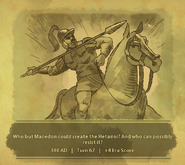