Recon unit of the Industrial Era

Combat Strength bonus when fighting in Hill and Woods terrain.

Wikipedia has a page called:
42nd Regiment of Foot

The Highlander is a unique recon unit of the Scottish civilization in Civilization VI: Rise and Fall. It replaces the Ranger.

In addition to being stronger than the Ranger it replaces, the Highlander receives combat bonuses in rough terrain. Since it replaces a unit that does not seem to have a lot of use, the Highlander also has every problem that the Ranger has. (Read more here.) If you are playing Scotland for the first time and want a regular, most representative feel of the civilization, this unit should serve only as 4 Era Score and nothing else. If you are looking for a new and more challenging gameplay experience, continue reading.

Although it is possible to use the Highlander in combat, it is very hard to do so effectively. Your goal is to gain the Tier III

Promotion, Ambush, but since earlier recon units do not do a lot of combat because that is not their purpose, it is not possible to get a lot of pre-built Scouts to earn this and upgrade them later, even if you run Survey. Here is a few tips to earn the infamously hard to achieve promotion so your Highlander can actually have a purpose instead of the mere 4 Era Score:

Much like the Ranger it replaces, the Highlander does not seem to come into play too often, as scouting should definitely be demoted close to the bottom of your priority list in the Industrial Era and it does not do a better job at scouting than your regular Scout, either. Since Highlanders are worse than regular military units at fighting and require a prohibitive amount of setup to succeed, they should never be the factor you rely on to carry you to victory unless you are looking for something very, very unusual.

Unexpectedly, the Highlander exerts zone of control, despite being a unit with ranged attacks. This detail is not mentioned anywhere in the game, but is coded in the game files and still fully functional to date. Coupled with the fact that the Highlander likes to fight in Hills and Woods, enemies'

Movement may be hindered even more when approaching the Highlander, so it can be somewhat meaningful in a defensive war, especially if you have many Hills and Woods tiles in your territory. However, as analyzed with great details above that this unit and the Ranger it replaces have little impact on the battlefield, this feature, whether intended or not, is nothing more than an interesting piece of trivia without actual gameplay implications.

Unlike Civilization V, in Civilization VI, the site of the battle is actually the tile of the defender, not the attacker. Therefore, similar to other bonuses that grant extra

Combat Strength when "fighting on" certain terrain, the Highlander will receive extra

Combat Strength when it attacks a unit standing on Woods or Hills, regardless of where the Highlander stands. Also, the Highlander will receive extra

Combat Strength on defense if it gets attacked while standing on Woods or Hills. This bonus does not stack with itself when the Highlander fights on a Wooded Hills.

In the wake of Scotland’s 1719 Jacobite rising, the British Army recruited loyal Scottish clans (the Campbells, Grants, Frasers, and Munros) to promote unity and keep the peace in the Scottish Highlands. The first of the Highland Regiments was known as the Black Watch thanks to their classic dark tartans—with prominent red waistcoats to show their loyalty to Great Britain.

The British Army regulars carried a musket and bayonet into battle. The Highlanders took it a step further by charging into the fray with broadswords, an arguably uncommon weapon for the 18th Century. They first saw combat outside of their homeland at the Battle of Fontenoy (1745), where a French writer described them as “Highland furies” who fought with “more violence than ever did a sea driven by a tempest.” Highlanders continue to serve in modern times, though their broadswords are (presumably) ceremonial. 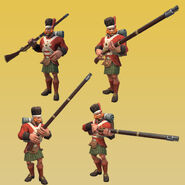 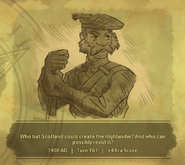