A district unique to Byzantium. Replaces the Entertainment Complex district, and provides +3

Amenities, and cheaper to build. When the Hippodrome and buildings in this district are constructed receive a Heavy Cavalry unit. The free unit does not require resources when created or to maintain.

Wikipedia has a page called:
Hippodrome of Constantinople

The Hippodrome is a unique

District of the Byzantine civilization in Civilization VI. It replaces the Entertainment Complex.

The following buildings can be constructed in a Hippodrome:

District is inarguably what makes Byzantium so fearsome on the battlefield, since it allows them to summon up a gigantic legion of heavy cavalry units in the blink of an eye, ready to sweep away anything that crosses their path. The biggest boon of the Hippodrome is its unique ability to instantly create a resource free heavy cavalry unit every time you complete this district and each building inside it. Along with the cheaper

Production cost of the district, this allow Byzantium to amass large armies of heavy cavalry units in a blink of an eye, tying in nicely with Basil II's leader ability. If properly utilized, this allows for Byzantium to shred through entire enemy civilizations with ease. Note that these resource-free units received from the Hippodrome will continue to be resource-free when upgraded. A powerful strategy with this district is to build a Hippodrome in every single city of yours, but switch

Production to something else when you are 1 or 2 turns away, until the Tagma that is unlocked with Divine Right. By doing so, you will instantly create an army of Tagmata, so massive that they are ready to decimate anyone in your way with little to no resistance. Of course, the amount of

Amenities provided by the Hippodrome is triple that of a regular Entertainment Complex, which will also keep your ever-growing empire happy and productive as you continue to add more and more cities to your civilization. Byzantium is probably the only civilization that should build Entertainment Complexes in every city, since the Hippodrome is such a powerful replacement for an otherwise underutilized

Amenities to prevent any cities from rebelling.

Just for comparison, a Tagma costs 180

Production in Gathering Storm), while a Hippodrome has a base cost of 27

Production, which will scale up to around 100

Production in Medieval, even cheaper if you remember to put them down immediately in all cities you have when you unlock the district to lock in the cost. Even the Arena only costs 150

Production, which is still a good deal if you can get a Tagma out of it. Since the cost of the Hippodrome scales upward with civic and technology progression, in order to minimize its cost when the Tagma is unlocked, make sure to beeline straight for Games and Recreation (requires 4 civics before it, 7 civics if you detour for Political Philosophy first), and afterward straight for Divine Right without taking any more detours. Also, you want your

Culture output to be always ahead of your

Science output, or at least always have more civics unlocked than technologies unlocked, which can be achieved by strategically researching without completing right away, so not building Campuses is actually recommended, since you do not need

Science will roll in naturally once the conquest starts. In order to actualize your timing push with your Tagmata, save at least one district slot in every city before the Hippodrome is unlocked, and immediately put them down in all cities to lock down the cheap cost as soon as possible, but wait until the Tagma is unlocked to finish construction. (If you want to know the reason why you should keep your

The Byzantines, like the Romans before them, loved their chariot races. At the hippodrome (from the Greek “horse way”), teams of four-horse chariots would careen around the U-shaped track – a slight improvement to the bloody gladiatorial pits of Rome. Rivalries between teams were so intense that they put modern-day soccer or football rivalries to shame. In 532, the “Nika riots” between rival fans burned down half of the city of Constantinople and nearly killed the emperor Justinian. The hippodrome was vitally important, then, to the happiness (and, sometimes, unhappiness) of the city’s inhabitants, and was a site where citizens could see and cheer along with (or against) their Emperor. 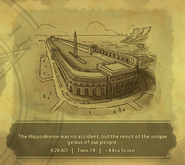