Combat Strength if there is at least one adjacent Hoplite unit.

Wikipedia has a page called:
Hoplite

The Hoplite is a unique anti-cavalry unit of the Greek civilization in Civilization VI. It replaces the Spearman.

The anti-cavalry promotion line is the most underused line in the game, since they get decimated by melee and ranged units and are ineffective against cavalry units, the ones they are supposed to counter. The Hoplite barely fixes any problems the regular Spearman faces. It is still weak against melee, gets out-ranged by ranged and outmaneuvered by cavalry units. Instead, they have 10 extra

Combat Strength when they stand next to one another, which allows them to be better at dealing with melee units and sturdier against ranged. However, once Swordsmen are unlocked, there is no way Hoplites can compete with them. Since Bronze Working and Iron Working are back to back technologies, investing into building a lot of Hoplites seems a like a huge waste; however, a Hoplite is almost identical to a Spearman unless you build more than one. Overall, this is the weakest link in the Greek arsenal. It should only be used as the last resort if your empire has no access to

Iron or need to quickly churn out a cheap line of defense in case of a Surprise War declaration. With the recent buff they have the possibility to be very strong, if used in groups of at least 3 units. It is also important to mention that they should still be kept closer together, due to the bonus

Give a bunch of citizen-soldiers ten-foot iron-headed spears (called doru), put them in a tight formation shoulder-to-shoulder, and the hoplite phalanx appears. In the 8th or 7th century BC, the Greek city-states first began to raise hoplite units – composed of those “free” citizens who could afford the bronze armor and the doru – for fighting among themselves. As the Persians found out, hoplite phalanxes were pretty effective against others as well. Although enemy archers might pick off a few (most of the arrows of the time were too light to penetrate the bronzewear of the Greeks), a phalanx of hoplites could generally sweep everything from the field in front of them; the greatest threat came from exposing their flanks, or losing formation moving over rough ground. The hoplite-phalanx survived for almost 400 years, through the age of Alexander the Great still dominant, until it came up against the Roman legion, faster afoot, more flexible in formation, and more adept with their short swords once they slipped past those unwieldy spears. 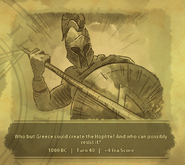 Historic Moment for building the Hoplite