Mounted unit of the Ancient era

The Horse Archer is highly superior to the unit it replaces: first, it doesn't require Horses to produce; second, it doesn't have the rough terrain penalty that its counterpart does, making it a more versatile and powerful early archer unit; and third, it already starts with a promotion that makes it more powerful in open terrain. Furthermore, since this promotion isn't a "special" promotion, you can build off it and train to the extremely powerful higher-tier promotions simply by killing Barbarians!

This combination makes the Horse Archer a very dangerous unit, which is available very early in the game. It is best used for swift hit-and-run attacks, whittling down the enemy, and preparing cities for capture by your Warriors and Battering Rams.

The fearsome cavalry of the Huns, renowned for both their skill in archery, and their mastery of horsemanship, were the scourge of Europe during the Hunnic conquests of the 4th and 5th centuries AD. Utilizing powerful composite bows, the mounted archers of the Huns honed their skills while hunting on the Central Asian Steppe, and they had no trouble carrying over these skills into warfare. It is widely believed that the Huns' use of mounted archers greatly influenced the future military considerations of both European and Asian kingdoms, as a greater emphasis on cavalry units arose following their incursions. 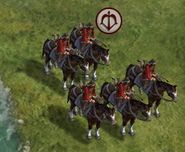