World wonder of the Medieval Era

Amenity from entertainment for each Lake tile within one tile of Huey Teocalli.

Production for each Lake tile in your empire.


"But the wrath of Huitzilopochtli was great, and as the sacrifice passed each of the four rooms dedicated to the sun god, the sun disappeared or reappeared in the sky."
– Fray Diego Durán

The Huey Teocalli is a Medieval Era Wonder in Civilization VI. It must be built on a Lake tile adjacent to land.

The Huey Teocalli is great at boosting the

Amenities of a small empire and making all Lake tiles worth more, especially in cities that also have a Lighthouse. Aim to build it in the biggest lake you can find - the more Lake tiles adjacent to the wonder, the better. The best possible lake configuration will provide +6

The Dutch will benefit greatly from Huey Teocalli. They have a good incentive to settle alongside lakes so they can harness their Polders' adjacency bonuses, and can boost their

Production bonuses even further by building this wonder.

In the Aztec Empire, a teocalli was a terraced pyramid, surmounted by a temple on top, site of all the important religious rituals in the town. The greatest was located in the heart of Tenochtitlan, the Huey Teocalli (or, according to the Spanish, the Templo Mayor) dedicated to a pair of gods: Huitzilopochtli, the god of war, and Tlaloc, the god of agriculture (an indication of what was important in Aztec culture). Each god had a separate temple, reached by separate staircases. Mesoamerican pyramids tended to be rebuilt, using the prior structure as the base for the new, expanded version. Thus, Huey Teocalli was rebuilt six times after the first was completed around 1325 AD. The seventh, and last, was the one sacked and destroyed by Cortes and his conquistadors. Likely they took a dim view of the place, as it was given over to curious celebrations… such as the Panquetzaliztli festival celebrating Huitzilopochtli, when an effigy of the god made from amaranth seeds, bones, honey, and human blood was venerated, then given over to the populace to be eaten. 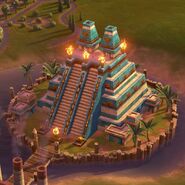 Huey Teocalli in its wonder movie