Ranged unit of the Ancient Era

Wikipedia has a page called:
Spear-thrower

The Hul'che is a unique ranged unit of the Mayan civilization in Civilization VI. It replaces the Archer.

Ranged Strength than the Archer and a bonus against wounded units, the Hul'che is similar to the Pítati Archer with part of Tomyris' leader ability. However, its use case generally differs from that of the Pítati Archer or the Scythians' ranged units in that it is best used for fending off early aggression and capturing cities of enemies who settle within the Maya homeland, rather than as a tool for early aggression itself. To this end, the Hul'che also receives Lady Six Sky's bonus of +5

Combat Strength within 6 tiles of the Mayan

Capital, which can result in the Hul'che rivaling the Crossbowman when firing on injured enemies close to the

Capital! Generally speaking, Hul'che are best used in pairs or trios, with one Hul'che delivering the initial blow and the rest killing or severely wounding the target with their enhanced

Despite the in-game description stating that the Hul'che receives +5

Combat Strength when fighting wounded units, the bonus only applies in the form of

Ranged Strength on offense without extra

Combat Strength on defense when it gets attacked by a wounded unit.

The hul’che, a Mayan weapon for throwing a dart or arrow, seems at first to be quite simple. It is a long wooden shaft with a notch at the end, where an arrow sits. Used by an experienced marksman, the hul’che greatly increases the force of a throw, throwing a dart at over three hundred miles per hour (150 meters per second). Against lightly armored Mesoamerican soldiers, the hul’che would have been deadly. It was used in many ancient societies: the Aztec called it the atlatl, Australian aboriginal groups called theirs a woomera, and archaeological evidence for similar devices exists across Europe.

Both Maya men and women were trained in the use of the hul’che. Mayan battles would begin with an exchange of hul’che darts, wounding opponents before individual melee fighters rushed in in a search for individual glory. 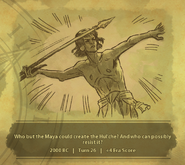