The Hunnic people (or Huns) represent a civilization in Civilization V: Gods & Kings.

The Huns are obviously the most offensive civilization in the game, always looking for a domination victory rather than other victory conditions. They are the only civilization which has a siege weapon in the Ancient Era, and are thus able to combine two siege weapons in a single era (Battering Ram and Catapult), allowing them to capture cities early and with ridiculous ease. Add to that the powerful Horse Archer, also available in the Ancient Era, and you get an offensive juggernaut. Start your offensive early on and few will be able to stop you.

What appears to be less obvious is that the Huns have a unique ability that make them not only an excellent offensive civilization, but also a decent defensive civilization. "Scourge of God" could just as accurately be called "Scorched Earth," because one of the characteristics of the ability allows you to raze cities twice as fast. This ability is useful for thwarting any attempt by the enemy to retake captured territory: after capturing an enemy city, sell all the buildings in it, then set it ablaze. If your enemy manages to reclaim the city before it is destroyed, it will be depopulated and undeveloped, and they will have to spend time and

Gold to rebuild it.

Another useful feature is the extra

Production for every Pasture you control, helping you increase

Production in order to speed creation of military units. With the Animal Husbandry technology already researched, you will have the chance to produce mounted units earlier (and faster) than the other civs, provided you have access to a source of

Migrating throughout Europe in the 4th and 5th centuries AD, the nomadic Huns were a tribal people originally thought to have their origins on the steppes of Central Asia. United under the charge of their most memorable leader, Attila, the Hunnic army plundered and pillaged its way across Europe, becoming a notorious scourge to the Romans and their allies.

Believed to have migrated from Mongolia and Central Asia, the Huns first crossed the Volga River sometime in the late 4th century. A region of great geographic diversity, the highly elevated, rugged plains of Mongolia are surrounded by mountainous forests, grasslands, deserts and hundreds of small lakes and marshes. The area is home to various species of wild horses, which surely contributed to the Huns equestrian mastery.

At their height, the Huns controlled a wide range of territory across Central Europe, from the steppes of Central Asia to what is now modern Germany. This vast array of geographic and climatic variations seems to have had little effect on the Huns ability to rule such a broad swath of territory.

Origin of the Huns[]

A hotly contested topic, the true origin of the Huns eludes us even today. By most accounts, the Huns "came out of nowhere" and wreaked havoc on anyone they encountered. The Huns were possibly the descendants of the Xiongnu, a tribal confederation of equestrian nomads found in the northern regions of China. The Xiongnu frequently launched raids against the Chinese Qin Dynasty during the 3rd century BC, and, along with various other nomadic tribes, were part of the reason the Chinese built the Great Wall of China. The Huns appeared in parts of Europe just around the time the Xiongnu faded from sight, this mysterious arrival of a new society in the west, coinciding with the disappearance of another in the east, stands as one of the few links between the Huns and the Xiongnu.

Early records of the Huns were far from impartial, having been written from the perspective of their numerous enemies, and leaving behind a spotty history of the Huns' initial conquests. Crossing into Europe in the 4th century, the Huns are said to have subjugated several rival tribes including the Alans, the Ostrogoths, and the Visigoths. While still only loosely united at this point, the Huns also boldly attacked portions of both the Eastern and Western Roman Empire, while also working as mercenaries for Rome against other tribes, successfully playing both sides of the field. It was during this period that the Byzantines (the Eastern Romans) began paying tribute to the Huns in order to secure peaceful relations, although the Romans often failed to meet their obligations.

The history of the Huns becomes more certain in the time directly before the rule of Attila. Preceding him was his uncle Rua, who gradually established complete control over the diverse Hunnic forces and eliminated all opposing leadership. Rua maintained an iron-fisted rule over the Huns and launched a number of successful attacks against neighboring tribes before setting his sights on bigger objectives.

Ruling as King of the Hun Confederation - as it became known at this point in history - Rua initiated a number of conflicts with the Eastern Roman Empire. It seems that several of the tribes previously subjugated by the Huns fled to the Byzantines in the hopes of seeking asylum. Rua, demanding they be turned over, set his armies loose on the Byzantine territory and pillaged Thrace, to the northwest of Constantinople. However, in the midst of his campaign, Rua was killed, allegedly after being struck by lightning, and the Huns were forced to retreat.

Following Rua's death in 434, Attila and his brother Bleda shared a dual kingship, continuing the expansion of Hun territory across Europe. Sustained primarily by a steady income of tribute and plunder, the Huns became an increasingly powerful force on the European continent in the 5th century. The Roman General Aetius, who had previously allied with Rua and used the Huns to aid in securing his position as commander of the Roman troops in Gaul, again hired the Huns to serve as mercenaries in his campaign against the Burgundian raiders attacking the northern Roman provinces.

Flush with wealth, the Huns once again moved on the Eastern Roman Empire (a favored target of their campaigns) and intimidated the weakened Byzantine leadership into signing the Treaty of Margus in 435. This treaty was said to have doubled the previous tribute due from the Byzantines - which was already several hundred pounds of gold per year - further increasing the resources of the Huns. As was the case in the past, the Byzantines failed to meet their obligations and delivered no tribute, and as before, the Huns returned to the Eastern Roman territory and sacked a number of cities, eventually reaching Constantinople in 443. The Byzantines once again agreed to deliver substantial tribute, this time triple the original amount, and the Huns took them at their word and withdrew.

Attila's brother Bleda died in 445, and Attila became sole ruler of the Hunnic Empire. By 447, Attila had defeated the Eastern Roman armies and captured a number of Roman forts, gaining control of the Balkans. The Romans again tried to ply the Huns with tribute, and for a time, they actually paid it ... at least until Attila had focused his attention elsewhere.

In 451, Attila invaded Gaul, attacking a number of cities en route to Orleans. Ironically, the Huns early benefactor, Roman General Aetius was now forced to face them head-on in defense of Gaul. Leading a combined force of Romans and Visigoths, General Aetius and his army met Attila at The Battle of Catalaunian Plains and managed to rebuff the Huns. Suffering the first major defeat of his career as a military commander, Attila was forced to withdraw from Gaul and regroup. Always the ambitious conqueror, Attila moved his forces east with the intention of striking Italy and the heart of the Romans.

Sacking various cities in northern Italy, Attila never made his way to Rome. Although some historians believe it was the intervention of Pope Leo I who convinced Attila not to march further, others claim it was the threat of reinforcements from the Eastern Roman Empire that truly swayed his decision. Shortly thereafter in 453, Attila died unceremoniously on his wedding night, falling to, some historians claim, a simple nosebleed. Without the forceful leadership of the charismatic Attila and his legendary reputation, the Huns mystique as an unstoppable force was broken.

Following Attila's death, the Hunnic Empire was to be ruled by his oldest son Ellac. However, Attila's other sons, Dengizich and Irnk, also sought the throne and internal divisions within the empire quickly brought about its downfall. Only a year after his reign began, Ellac was killed at The Battle of Nedao in 454, during which the Huns were soundly defeated by an army of united Germanic tribes. After his brother's death, Dengizich secured the throne for a brief rule, but the Huns, now in an increasing state of disarray, soon vanished from history as quickly as they had arrived. When Dengizich died in 469, it is thought that the remaining Hunnic people began to migrate back towards their ancestral lands on the Central Asian steppe.

Although mysterious in origin, by most accounts, the Huns ate, slept, and died on horseback, which helps explain why they were known throughout history for their expertise in mounted combat and equestrianism. Sustained primarily by their efforts as herdsmen and shepherds, the Huns kept a variety of livestock that provided mobile food sources as well as hides for clothing. They were also gifted archers who would hone their skills through frequent hunts, employing specially crafted composite bows that made them deadly to adversary and prey alike.

Despite their legacy as conquerors, the Huns also had skilled craftsmen and artisans among their people. A number of bronze artifacts attributed to the Huns have been found within the regions they once inhabited, including bronze cauldrons thought to have been used in Hunnic burial rituals.

The Italian composer Giuseppe Verdi wrote the opera "Attila" in 1846, which provides a fictional account of Attila's death at the hands of Odabella, a woman he was pursuing.

The Romans nicknamed Attila "The Scourge of God," undoubtedly because of his relentless pursuit of conquest, primarily at the Romans' expense.

Some historians suspect the Huns practiced "headbinding," a process in which they bound the head of an infant with cloth or other materials in order to change its shape. It is believed the Huns hoped to intimidate their enemies by creating broad, flat faces for their men.

The names of all Hunnic cities founded after their

Capital are randomly taken from the bottom of other in-game civilizations' city lists. The appearance of the Huns can give a strong clue as to which other civilizations are in a game.

If Venice is the only other civilization in a game or all possible city names have been used, Hunnic cities will take their names from the city lists of civilizations that are not in the current game.

Capital, Addis Ababa (north), and the Ethiopian city of Harar annexed by the Huns (south) 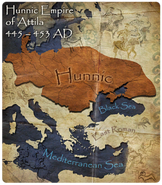