Combat Strength for every active Alliance.

Wikipedia has a page called:
Hussar

The Huszár is a unique light cavalry unit of the Hungarian civilization in Civilization VI: Gathering Storm. It replaces the Cavalry and requires 10

Between the two unique units of Hungary when led by Matthias Corvinus, the Huszár is harder to utilize effectively, since you cannot control if your opponents will like you enough to form Alliances with you, especially in single player games when your conquests can start as early as the Classical Era right after Swordsmen are unlocked. Its only major upside, despite having very limited synergy with Hungary as a domination powerhouse, is that it has 3 extra

Combat Strength compared to a standard Cavalry at a negligible

Production cost increase. If you are able to get someone to declare friendship with you before your warmongering starts and appease them enough to establish an alliance with you when the Industrial Era comes, the Huszár's bonus might be somewhat more noticeable; otherwise, this unit is rather unremarkable, with its bonus too rarely applicable to be significant.

The Huszár (often spelled “hussar” in Western Europe) are a class of light cavalry, commonly used for reconnaissance and pursuit of routed forces. One of the recurring motifs of warfare in Central and Eastern Europe is the prevalence and effectiveness of light cavalry, and the Huszár is one of the last types of horse cavalry. The term dates to the reign of Matthias Corvinus during the 15th Century, and refers to unarmored riders equipped with lances and shield, but became more generalized to Hungarian and Balkan light cavalry who fought as skirmishers. The word itself is from the Serbian word for “brigand.”

Huszárs had highly distinctive uniforms. Their gold-lace fronted jackets are called dolman. Over this they would wear a short cape, called the pelisse. The busby is the large, furry hat. In addition, many Hussars (particularly between the Seven Years' War and the Napoleonic Era) wore their hair long, in elaborate plaits, and favored enormous mustaches in what may once have been a traditional hairstyle but over time simply became part of the panache of the Huszár.

In the 19th Century, Hussars were the equivalent of fighter pilots: Dashing, insouciant, sexy, and brave at their best, and borderline-insubordinate, sneering drunks at their worst. Literature of the period uses the hussar as a trope to depict a character as a high-living rogue.

It is necessary to distinguish between a traditional hussar and the Polish winged hussar. The latter are armored shock cavalry who fought with lances on the charge. Polish actually uses a different military term for these hussars from more conventional hussars. 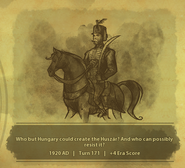 Historic Moment for building the Huszár
Community content is available under CC-BY-SA unless otherwise noted.
Advertisement