Ranged unit of the Renaissance Era

Wikipedia has a page called:
Hwacha

The Hwacha is a unique ranged unit of the Korean civilization in Civilization VI: Rise and Fall. It replaces the Field Cannon and is unlocked with Gunpowder.

The Hwacha is an average unique unit, neither weak and forgettable nor outstanding enough to build entire strategies around. It has the same

Ranged Strength as and lower

Gold maintenance costs than the Field Cannon, and is available an entire era earlier. It also, like a siege unit, cannot attack after moving unless its maximum

Movement is at least 1 above normal. (For more details on how the move-and-shoot rule works, head here.) Placing it near a

Great General is the easiest way to satisfy this condition, but the Koreans' lack of incentives to build Encampments make them unlikely to earn

Great General, so they will most likely be limited to using the Hwacha as a defensive unit. The Logistics policy card is recommended if you want to use the Hwacha more effectively, since it allows Hwachas to be on the offense against civilizations whose borders adjoin Korea's and more mobile on defense.

The earlier availability of the Hwacha, however, can work to Korea's advantage. The Koreans' bonuses to

Science output allow for unparalleled technological advancement, so if they have strong

Production potential in their cities and/or a lot of extra

Gold, they can potentially surprise their neighbors with a legion of Hwachas at their doorstep. Both players who play as and against Korea tend to overlook how early the Hwacha can be unlocked, so a surprise war with this unit can yield a good result.

The Korean hwacha (or “fire chariot”) launched the most terrifying fireworks display of the 15th Century. At first glance, this simple, two-wheeled wooden cart bears little more than a slotted horizontal board as its cargo. When fully loaded and fired, dozens of rocket-propelled projectiles would streak out from those slots, raining a steel-tipped volley upon distant enemy formations.

This efficient death machine came to prominence when it helped repel a late 16th Century Japanese invasion of Korea. The hwacha presence at the Battle of Haengju significantly aided the 3,400 Korean defenders against an invading samurai infantry nine times their size. 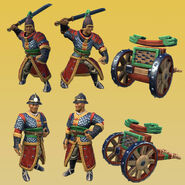 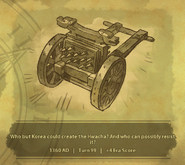 Historic Moment for building the Hwacha