Building of the Modern Era


The Hydroelectric Dam is an advanced building that supplies a renewable source energy in Civilization VI: Gathering Storm. It is built in the Dam district.

Power source which is incidentally also the densest of the lot, providing 6

Power to its city. Unfortunately, its requirements limit its usefulness. Cities on rivers become a bit less common in Gathering Storm due to the danger of flooding, but on top of that, not every city on a river gets to construct a Dam - your ability to do so will depend on whether there are floodplains as well as whether there is already another Dam on the same river. Ultimately, your

Power generation will be mostly via other sources.

If you are lacking in

Oil, a Hydroelectric Dam can be a worthwhile investment to complement your Power Plants. This is doubly true for the latter, since

Oil is required for constructing many military units as well and you should avoid using much of it. However, if you have tons of one of those two resources stockpiled, then whether or not to build one becomes more situational: if most of your cities are far from the coast, for example, and you estimate coastal flooding from climate change will not affect you too much, then its moderately high

As like all other buildings, the Hydroelectric Dam is city-unique, even if a city has multiple Dam districts.

A hydroelectric power plant uses moving water to drive turbines connected to dynamos to produce electricity. The faster the water moves through the plant, the faster the dynamo can turn, and the more electricity that can be produced. Consequently, hydroelectric power plants are usually incorporated into dams where the height differential between the reservoir and the outflow can be used to boost the flow speed through the turbine. Compared to fossil fuel plants, hydroelectric plants produce far less emissions and waste, and are far more efficient in converting energy into electricity.

Nonetheless, hydroelectric plants do have environmental costs. Damming rivers changes their ecology drastically, and large-scale hydroelectric projects affect the culture and history of a people. The Tennessee Valley Authority resulted in the displacement of thousands of small communities. The Three Gorges Dam destroyed archaeological and cultural sites. 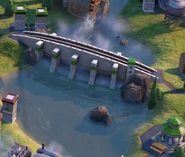