Wikipedia has a page called:
Hypaspists

The Hypaspist is a unique melee unit of the Macedonian civilization in Civilization VI. It replaces the Swordsman.

In the Gathering Storm expansion, the Hypaspist requires 5

Although the Hypaspist wields a spear, it's not an anti-cavalry unit: it's a melee unit that functions best when adjacent to other friendly units or attacking a district. The Hypaspist often has to live in the shadow of the Hetairoi, considering how powerful the other unit is, but it is still an above average unit. It sports 38

Combat Strength, slightly higher than the standard Swordsman, with only a marginal cost increase (10

Production). The best part about the Hypaspist is that it only requires 5

Iron to be trained, a quarter that of a Swordsman, meaning Macedon can still quickly churn out quite a few Hypaspists when only having one

Iron source. With 38 base

Combat Strength from a

Great General (which Macedon is overwhelmingly likely to have thanks to all the Encampments, Basilikoi Paides, and Hetairoi), and 5

Combat Strength when fighting a

District, you are looking at a Swordsman that can fight defensible

Combat Strength. A mixed force of Hypaspists and Hetairoi will prove very difficult for other civilizations to fight off in the early stages of the game, as they are well-equipped to fight against both units and

The Hypaspist's increased support bonus means they benefit more from support, but they are not better at providing such bonuses for other units. For example, a Hypaspist and a friendly Warrior both flank an enemy unit to form a triangle; when attacked, the Hypaspist will receive a +3

With the introduction of the Man-At-Arms in the April 2021 Update, the prowess of the Swordsman and its replacements gets significantly reduced. Although the Hypaspist is no exception, its power level does not get hit as hard as the Toa's. You can still have a meaningful domination rush with this unit in combination with the Hetairoi, thanks to its 75%

Iron requirement discount, allowing you to churn out Hypaspists a lot faster than your opponents can build Men-At-Arms. Remember that

District defenses depends on the highest

Combat Strength of a unit you have built, so the moment the first enemy Man-At-Arms is built, the Hypaspist will be worse at besieging

Districts; however, thanks to the ability to earn

Combat Strength compared to the Swordsman, the potential number advantage coupled with extra support bonus, the Hypaspist won't struggle too much against Men-At-Arms.

Among the Greeks, a hypaspist (or “shield bearer”) was a lightly-armored soldier who possessed great flexibility on the battlefield. Philip II of Macedon turned them into legends. The Macedonian phalanx, while very nearly impregnable, was most vulnerable at its flanks and in its rear. Though the hetairoi (or “Companions”) could help protect against such attacks, their essential role as shock cavalry meant they were best used in a more offensive role.

Thus, the hypaspistai. With a solid round shield, linen armor, and a short spear, the hypaspistai could rapidly maneuver to protect against attacks from infantry or cavalry. In turn, the hetairoi would protect the hypaspistai, providing progressively flexible flanks around an exceptionally spiky and slow-turning center. Philip’s elevation of the hypaspistai stressed the importance of maintaining the phalanx, and in turn provided an elite unit for young soldiers of Macedon to aspire. His son Alexander the Great would continue Philip’s tradition. 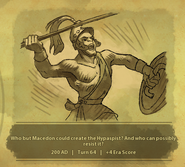