Edit
watch 02:19
Wiki Targeted (Games)
Do you like this video?
Play Sound

Ibrahim, otherwise known as The Grand Vizier, is a unique Governor of the Ottoman civilization (when led by Suleiman) in Civilization VI: Gathering Storm. He is the Ottomans' key to success in both military conquest and diplomacy.

Suleiman's vizier Ibrahim, is a Military and Diplomacy focused governor. In addition to having a unique promotion tree, Ibrahim is the only Governor that can be assigned to another civilization's capital as well as any domestic city. He is well suited for influencing military operations but is also a skilled diplomat, strengthening relationships with friendly civilizations and easing tensions with rivals.

Like Victor, Ibrahim needs only 3 turns to establish himself in a city.

Pargali Ibrahim Pasha was Grand Vizier of the Ottoman Empire and childhood friend of Sultan Suleiman the Magnificent. Likely born in Epirus around 1495, to a Christian family, he was a household slave of the same age as the young Suleiman, and the two were close growing up. First appointed as the Royal Falconer to Suleiman, he gained greater and greater status over his thirteen years in office, eventually becoming Grand Vizier and commander of the armies in 1523. By many accounts, he was loyal to Suleiman and trusted by the sultan—at least at first.

Suleiman trusted Ibrahim Pasha enough to appoint him governor of Egypt in 1525 to reform that province (the previous governor had opted to revolt; some changes were obviously in order), but after that Ibrahim appears to have fallen under suspicion in the Topkapi palace intrigue. As a powerful minister, he wielded almost as much authority as the sultan himself, who began to suspect his old friend of conspiracy. Eventually in 1536, Suleiman ordered his execution and confiscation of his property. 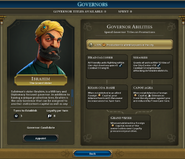