Culture if adjacent to a Stadium
Provides

The Ice Hockey Rink is a unique tile improvement of the Canadian civilization in Civilization VI: Gathering Storm. It must be built on Tundra, Tundra Hills, Snow, or Snow Hills tiles.

As of the final patch of the game, the Ice Hockey Rink, once a nigh-useless unique improvement, becomes integral to Canada's cultural prowess and ability to thrive in Tundra. Tundra is nearly useless to civilizations other than Canada (and Russia), offering a pathetic 1

Food. The resources that can spawn on Tundra can all be found on other, more productive, warmer tiles as well.

As a general rule, it's often not considered worth it to work tiles with high non-

Universally, Farms, Mines, and Camps all improve throughout the game at various technologies, giving Canada an excellent incentive to settle in Tundra and continue to do so as other civilizations fight over more contested land, while Canada claims the bounty of the Tundra for themselves and only themselves.

By the time you reach Professional Sports, Ice Hockey Rinks gain an extra 2

Production, which makes them viable tiles to actually work for any newly settled cities (although this implies you are still settling cities that late into the game), and otherwise just further empowers Canada's late game strengths.

Tundra is a very consistent and common type of terrain, unlike Plains and Grassland, which can often randomly overlap or end abruptly, which makes placing the Ice Hockey Rink and getting the maximum +6

Culture from surrounding Tundra and Snow tiles incredibly easy. As each city may only place one Ice Hockey Rink, an ideal setup is to place an Entertainment Complex within the range of 3 cities, as you will be building a Stadium later to raise the adjacency to +10

Culture, place your Ice Hockey Rinks around the Entertainment Complex, but not adjacent to one another, and those cities' Theater Squares in the other spaces to further raise your Tourism.

It should be expected that you will not have the perfect setup every time, and as such, Ice Hockey Rinks also have another, less obvious bonus: they provide 2 Appeal to adjacent tiles. Strategically place these in locations adjacent where you plan to place National Parks, and then once you have Conservation, you have the freedom of using your Builders to place more Woods and raise your Appeal even further everywhere, and the Mountie to realize those parks.

There's nothing quite as satisfying as a game of ice hockey on a frozen pond on a sunny and cold winter day. Except sometimes the pond ice is uneven. Spectators can't always comfortably see what's going on. Bright and sunny winter days are subject to the vagaries of the weather. Organs are difficult to set up and take down between games. So there's really nothing quite as satisfying as a place that addresses some of those problems: The ice hockey rink.

The skating craze at the end of the 19th Century led to a boom in rink construction. The first organized indoor hockey game was at the Victoria Skating Rink in Montreal in 1875. Since then, ice quality has improved due to improvements in ice formation chemistry and the domestication of the wild Zamboni. Amenities at the rink have improved as well to ensure fans have food and drink and boards to protect from errant pucks. 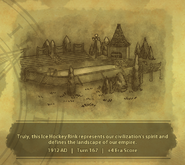