"Son, have you seen the rain of God? It passed and entered beneath the mountains of God... There will be a ring in the sky where the water of God has passed."
– Books of Chilam Balam

Production when building wonders and

Districts next to it. It is a very deep cenote filled with water found in the Yucatán.

Though it is a fresh water source, you cannot build an Aqueduct to it.

Although Ik-Kil does supply fresh water, it is of your best interest to not settle right next to it, since every one of the six tiles surrounding this Wonder is invaluable for city development. By building wonders and districts near Ik-Kil, you can get 50% more

Production, which is further amplified by civilizations and leaders like Qin Shi Huang, France, Egypt, Hungary, and Amanitore. Australia can also benefit greatly from Ik-Kil since their districts are now not only built faster, but also receive extra adjacency bonus due to high Appeal tiles. The most ideal way to make the most out of Ik-Kil is to settle 2 tiles away from the wonder so you will receive an extra 3 Era Scores from doing so and have controlled access to all 6 tiles surrounding it.

Perhaps not the best place to visit for those with thalassophobia, Ik-Kil is a natural sinkhole into groundwater – a cenote – found in Yucatán, Mexico near Chichen Itza. The water can be found 85 feet below ground level, down a carved stairway amongst draping vines and falling water. The water at the base of the hole is 200 ft across and 164 ft deep, and available for tourists looking to swim or snorkel among the black catfish.

Cenotes were sacred to the Mayan residents of the area, providing fresh water and a space for ritual ceremonies, including human sacrifice – though there is no evidence that Ik-Kil was used for this purpose.

These geographic marvels can be found throughout the world, but there is a very high concentration in Mexico - over 6000 of varying sizes known in Yucatán alone.

Ik-Kil as seen in game 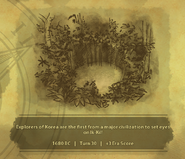