Wikipedia has a page called:
Kraal

The Ikanda is a unique

District of the Zulu civilization in Civilization VI: Rise and Fall. It replaces the Encampment.

The following buildings can be constructed in an Ikanda:

For Shaka, the name of the game is to build the world's largest and most powerful infantry force, and the Ikanda helps him immensely in achieving this goal. With it, the Zulus can train Corps and Armies as soon as they discover the requisite civics (Mercenaries and Nationalism, respectively), and without needing to build Military Academies. The ability to create Corps in the Medieval Era gives Shaka and the Zulus an early military advantage over their neighbors, which becomes even greater when they go to war and gain a new Corps each time they capture a city.

Additionally, thanks to the Ikanda being a unique

District, the Zulus can construct it in half the time, meaning their first Ikanda can be completed much earlier than the full-price Encampments of other civilizations. Thanks to this, the Zulus will often be the first civilization in the game to begin earning

Great General points and possibly the first to earn a Great General. Though the Zulus power spike occurs during the Medieval Era (much later than how early your Ikanda allows you to generate Great Generals), building Ikandas early still helps deny enemy civilizations of Great Generals to defend and helps tremendously toward earning the Great Generals that buff up your Impi later on.

Gold bonuses for each building in it. This is not too exceptional, but it offers a quicker rush to the Impi as well as finances to support your armies.

The ikanda (also known as a “kraal” or “umuzi”) were self-sufficient, fortified Zulu homesteads. A double palisade protected its residents—the inner wall kept livestock in and the outer wall kept interlopers out. Ikanda were ideally placed uphill for reasons both practical and strategic: rainwater flowed downhill to clean the ikanda, while opponents were forced to attack an elevated position.

Shaka’s revolutionary changes to the military capitalized on the traditional Zulu age-grade system. Young men of the same age lived, trained, and fought together in regiments, relying on the ikanda’s bounty to provide their food, arms, and armor. 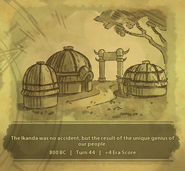 Historic Moment for building the Ikanda