The Immortal is a unique melee unit of the Persian civilization in Civilization VI. It replaces the Swordsman.

In the Gathering Storm expansion, the Immortal requires 10

The Immortal is an anomaly: in spite of being a melee unit and following the appropriate promotion table, it is essentially an Archer with 20 extra

Combat Strength and the ability to capture cities. Being able to pelt enemies with arrows from a distance while having the resilience to defend itself against attacks allows the Immortal to quickly and safely gain XP and levels, and groups of them can chip away at cities until they're ripe for the taking. Later on, when the Persians have researched Apprenticeship and stockpiled some

Iron, they can upgrade their Immortals to Men-At-Arms and have a powerful force of melee units at their disposal.

Note that, by default, the Immortal attacks in melee. This matters because the right-click attack shortcut will trigger a melee attack instead of a ranged shot (as it does for ranged units). If you want your Immortal to shoot the target instead of approaching and attacking it in melee, you should explicitly give a ranged strike command, and not right-click!

The elite heavy infantry of the ancient Persian Empire has a fearsome reputation, but much that is known of them comes from the writings of Herodotus, whose accounts were widely read but not necessarily accurate. For example, the very name by which they are known—the Immortals—was of Greek origin, not Persian.

According to Herodotus, they were said to maintain a force of exactly 10,000 soldiers who, upon injury or death, were immediately replaced so they would never be anything less than full strength. As elite troops they were afforded special luxuries, such as their own food kept separately from the rest of the army. Their clothes were vibrant, covering coats made of armored metal scales, and they carried a variety of armaments such as short spears, swords, and powerful bows. Whatever their actual disposition, they were respected (and feared) by their contemporaries. 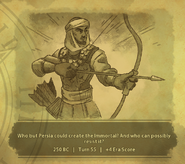 Historic Moment for building the Immortal