Melee unit of the Medieval era

Wikipedia has a page called:
Impi

Unique unit of the Zulu civilization. Replaces the Pikeman.

The Impi is the legendary warrior of the Zulu, and one of the most powerful units of its time. When attacking other units, Impis first throw spears in the manner of a ranged attack (dealing some damage without receiving any), then follow up with a regular melee attack.

This acts as two attacks for experience purposes (allowing Impis to gain experience at up to double the speed of normal Pikemen), but one for movement costs. Note that when defending, the Impis don't perform the extra attack, meaning that their defensive strength is "normal" compared to other units. The end result is a significant increase in their offensive strength, as well as quick promotions.

The best use of the Impi is in swarming attacks. Large numbers of Impis are often too powerful for opponents to adequately counter. Thanks to the Zulu's unique ability regarding -50% maintenance costs for melee units, the Zulu are well designed to take advantage of an Impi swarm. Large numbers of Impis become more important the closer you get to the unit's obsolescence, as Musketmen and Riflemen cannot gain access to the Ikanda promotions that contributes to the strength of the Impis.

When defending, Impis become increasingly susceptible to damage, especially from gunpowder units. However, when attacking, they remain competitive thanks to their 25% bonus against gunpowder units. Their relatively low production costs will also aid in the quick construction of a sizable military by the early Renaissance.

Impis upgrade to Riflemen rather than Lancers. As such, they become obsolete with Rifling rather than Metallurgy, and remain on the battlefield until early Industrial Era; furthermore, the anti-cavalry and anti-gunpowder combat bonuses, along with the spear throw, are not retained after upgrading to the Riflemen, so the Zulu will have to either refrain from upgrading some Impis, or research Metallurgy and train Lancers instead. However, the newly upgraded Riflemen still maintain the Ikanda promotions, making them faster and stronger than other Riflemen, whether trained later by the Zulus or those trained by other civilizations.

"Impi" is the Zulu word for an armed body of men, although in common usage during the 1800s it referred to one of the Zulu empire's regiments. While impi had long been a feature of Zulu culture, their great chieftain Shaka instituted broad innovations upon his ascension to the throne in 1816 AD. In addition to their traditional club and throwing spear, Shaka armed his troops with the assegai, a short-shaft stabbing spear with a broad, 30 cm (1 foot) long blade. He introduced a larger, heavier cowhide shield (isihlangu) and trained his forces to quickly close with the enemy for devastating hand-to-hand combat. Strategically, the impi relied on speed and surprise to suddenly outnumber and overwhelm their enemy. Using such methods the Zulu won impressive victories, even against rifle-armed Europeans, although their own casualties were high. 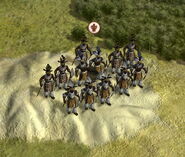